The last few weeks, our Data Science Team analyzed the most active petitioners in Inter-Partes Review (IPR) cases. Now we have turned our attention towards the patent owners in IPR cases. Our analysis shows that since IPR’s inception in 2012 through the end of 2016, over 5,990 cases were filed. These cases targeted patents owned by more than 1,700 unique entities from individuals to non-practicing entities (NPE) and operating companies. The top ten entities were named as patent owners in 555 cases or approximately 9 percent of all cases filed. 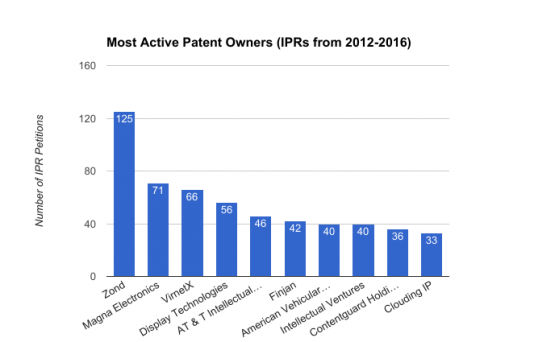 The first company, Zond Inc. is headquartered in Mansfield, Massachusetts (www.zpulser.com) with a total of 125 petitions filed by 9 petitioners against 10 of their US patents. The petitioners included Intel, Toshiba, Renesas Electronics, GlobalFoundries, Advanced Audio Devices, TSMC and Gillette.

The second company on the list is Magna Electronics, an operating company in the automotive industry, which had 35 of its patents challenged 71 times by only three companies, all auto-parts manufacturers: Dako North America, Valeo and TRW Automotive Holding.

The data shows that some patent owners are targeted more than others. For example, while Intellectual Ventures is the largest patent aggregation firm with many active licensing programs, it is 7th on the list after several small entities.

We decided to review this from a different angle. Instead of the highest number of IPR cases, we looked at the highest number of patents challenged. Manga Electronics with 35 patents was at the top, followed by AT&T with 24 and Intellectual Ventures with 23 patents. From 2012 through the end of 2016, total of 5,992 IPR challenges were filed. In total 3,496 unique patents were challenged. The top 10 companies accounted for 5 percent or 194 of all patents.

Finally, we looked at the number of unique petitioners to determine the patent owners that have been targeted the most by other companies. The first three patent owners were Display Technologies, AT&T Intellectual Property and E-Watch, all with 11 petitioners challenging their patents.

Analyzing the patent owners by number of cases, petitioners and patents shows that some patents have been targeted many times by a few entities. For example, total of 125 IPR challenges have been filed against 10 patents owned by Zond Inc. These were filed by only 9 entities. Zond has the highest ratio of IPR cases to patents (i.e., 12.5). Many factors may be taken into account when a company decides to file an IPR petition. For example, the products targeted by the patents, size of the market and the revenue generated by the products, strength of the patent, the technology domain and access to strong prior art, historical behaviour and financial health of the patent owner are among the reasons that companies consider before they decide to file a petition. While we showed thatIPR denial rate has been rising, some have argued that from the patent owner’s perspective, often times the patent is beaten so many times by different parties that regardless of overall denial rate of IPR, none of the claims for a specific group of patents will survive all the challenges.

In the coming weeks, we will focus and dig deeper into Zond cases to better understand the outcome of the cases at the claim-level, the counsels that represented them before the PTAB, the judges involved in their cases, and finally, what percentage of claims survived all those challenges.