Last week, we released the top 10 patent owners whose patents had been challenged the most since the inception of Inter-Partes Review (IPR). Zond ranked first with a total of 125 IPR challenges filed against ten of its patents. This week, our Data Science Team took a closer look at the Zond cases. We learned that eight companies filed 125 challenges in 2014 in response to the patent lawsuits filed by Zond. Gillette ranked first with 35 IPRs, followed by Intel with 27 IPRs. We also examined the outcome of these IPRs at the case-level with respect to all petitioners and patents. 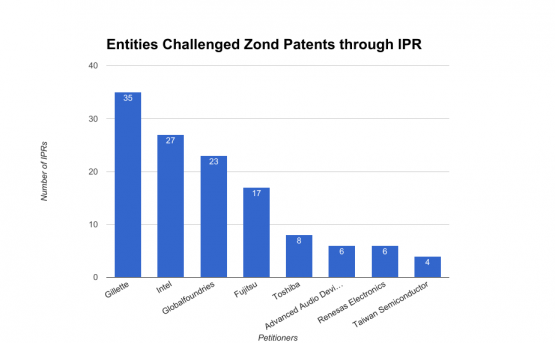 Out of 125 cases filed in 2014, 95 (or approximately 76 percent) reached the Final Decision phase. Only 13 cases were settled, and the remaining 17 were denied. 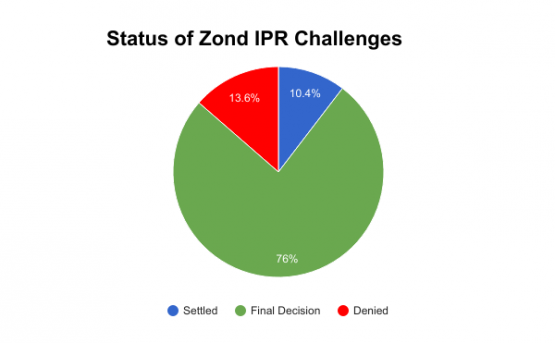 The following table summarizes the outcome of the cases filed by all eight companies. Intel filed all 17 cases that were denied. As we know, this impacts the overall percentage of denial rate reported by the patent office. However, in cases like these, as you can see, several companies have been targeting the same ten patents. Therefore, while 17 cases were denied and 13 other cases were settled, 95 other cases which had targeted the same patents had reached the final written decision phase.

From the perspective of the patent owner, those denied or settled cases are not important as long as there are other cases challenging its patents and potentially invalidating the claims.

We decided to review all ten patents and see how many times they were challenged. The following chart summarizes our findings. As you can see, patents were challenged an average of 12.5 times. The top two were challenged 23 and 21 times, respectively. 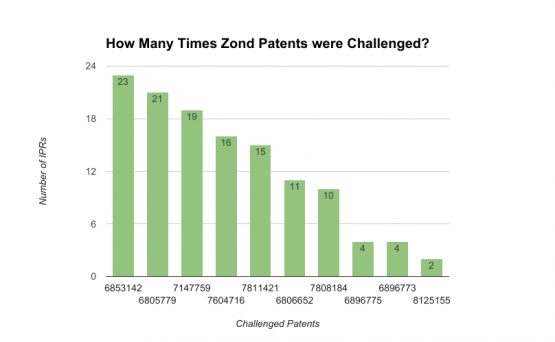 This shows an unfair fight between several petitioners and a single patent owner. No matter how good a patent is, once it is challenged so many times with different prior arts, it is very unlikely that any of its claims survive.

Some have been suggesting that solely relying on the denial rates reported by the patent office is not enough to conclude that patents are surviving the IPR challenge. Many have called PTAB, the patent death squad. Our study shows that in some cases, patents are challenged many times. The reality is that it only takes one successful IPR to completely kill all the claims of one patent. Therefore, the case-level status is not the best indication of PTAB performance and patent survival rate.

While IPR’s Final Written Decision usually means that some of the claims were invalidated, it does not necessarily mean that all claims were canceled. In the following weeks, we will look at these IPRs at the claim-level to see how many claims of these ten patents survived 125 IPR challenges.