Couple of weeks ago we reported that Zond ranked first among patent owners with 125 IPR challenges filed against 10 of its patents. This week we delved into the claim-level analysis of these IPR cases. A total of 371 unique claims had been challenged, and it was not surprising to us to discover that ZERO claims survived. All 371 claims were instituted and invalidated through at least one or more IPRs. 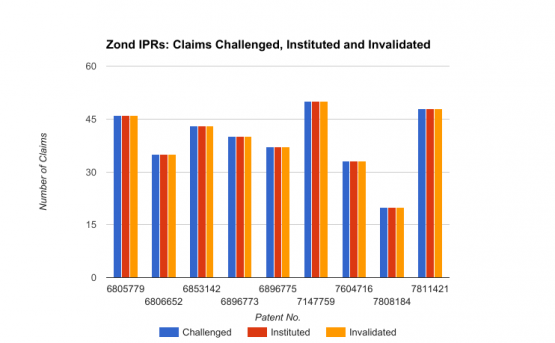 We reached out to Mr. Bassam Abraham, President of Zpulser LLC., the business arm of Zond, for his feedback. He confirmed our findings, while expressing his frustration in the US patent system. “None of the claims survived out of almost 400,” Abraham told us. “That should raise a flag. USPTO and PTAB should look at the claims based on the same grounds.”

Mr. Abraham further explained that Zond LLC, which designs and sells its products through a fully owned subsidiary Zpulser LLC., is an operating company based in Boston. Mr. Abraham and his partner, both coming from science backgrounds, founded the company in 2002. The 10 patents challenged by eight companies (as we reported in our Patexia Insight 31) were among 40-plus patents the two founders and their team filed as part of their R&D work over the past decade-plus. Mr. Abraham indicated that the company is not an NPE ( non-practicing entity), has active customers, and has been selling products for a long time. Although he remained optimistic about the future of his business, he was not as optimistic about the US patent system and the application of it for startups and young companies. Also worried that we have given foreign companies an easy tool to invalidate US patents in order to copy and produce similar products in the US and elsewhere bypassing all licensing rights which will have a big negative impact on our economy in the future.

During our research, we found out that a total of 371 unique claims had been challenged through 125 IPR petitions filed by eight companies. The IPRs challenged these claims 1,377 times. And in 1,220 of those times, they were instituted. At the end, in 528 cases, the claims were invalidated. This was enough to completely kill all 371 claims.

We reviewed these challenges patent by patent and claim by claim. The following table shows the number of unique claims listed under each of the 10 patents and the total number of times they were challenged, instituted, and invalidated through 125 IPR cases.

As we reported in our previous Weekly Chart (Patexia Insight 31: Can Patents Survive Multiple IPR Challenges?), some IP experts have expressed concerns about PTAB reviews and grounds for invalidation for quite a while. PTAB reports statistics at the case-level, but that is not enough to show the full picture. For example, looking at these 125 IPR challenges at the case-level, based on the status the PTAB released, shows that only 76 percent of cases reached the Final Written Decision, while about 14 percent were denied.

However, looking at the same cases from the perspective of the patent owner and challenged patents, we receive a completely different view. In the case of Zond IPR cases, we found that 100 percent of the 10 patents were invalidated. 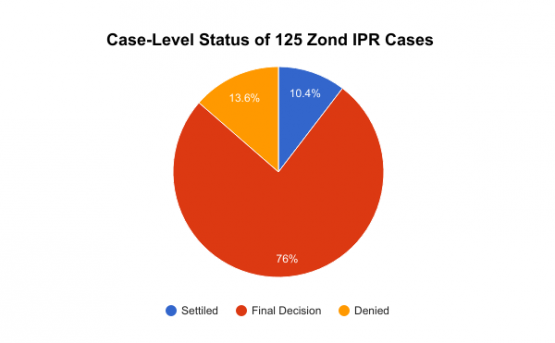 Our analysis of IPR challenges confirms our assumption that there may be a big difference between the way we look at the data and the actual case outcomes. In many cases, where a single patent is attacked by several companies, it only takes one IPR to invalidate that patent. Therefore, from the perspective of the patent owner, the invalidation rate is 100 percent, regardless of whether the rest of the IPR challenges are instituted.

Some of our readers have also indicated that the review process and invalidation rate is substantially different for different types of patent owners: Operating companies, Universities, and NPEs. In the coming weeks, we plan to review the PTAB statistics based on the company type. The goal is to perform this research again at the case-level and claim-level to determine if there is any difference.