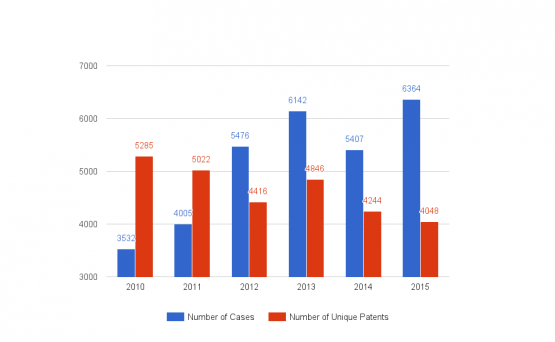 Since AIA became effective in September of 2012, numerous studies have suggested the rise of patent litigation. While some surmised the post AIA joinder rule is causing the rise, many studies simply relied on just the number of cases filed per year to draw a conclusion about rising litigation.

We decided to take an additional step and look at another metric that may give us a better sense of the litigation landscape: the number of unique patent assertions per year. Essentially, this metric tells us how many unique patents are believed (by their owners) to be infringed in the US market.

As we know, after AIA, a single patent may now be asserted more than 100 times (e.g., Shipping and Transit LLC has filedmore than 150 cases against many companies which, in most cases, only a single patent asserted (US7,400,970)). In our study, we counted this or similar cases once, because only a single patent was involved. As you can see in the above chart, the number of unique patents has been declining over the years.

Since AIA became effective, another hypothesis that some experts in the field have discussed was the potential rise in the number of patents asserted per case, which is believed to lower the likelihood of success for IPR, in the event all those patents are challenged by the defendants through IPR. Although this is a sound strategy to increase the success rate for the plaintiffs, the numbers show that, on average, plaintiffs have not leveraged this strategy in the past few years.

“One possible explanation may be the type of cases that contributed to the rise in filings in 2015. If many of them were low value, nuisance type cases that were filed before the change in the pleading requirements on December 1, 2015, they would not necessarily have more patents per case” says Sanjay Prasad, principal of Prasad IP, PC in Los Altos, California, who regularly advises patent owners and accused infringers in patent infringement disputes. 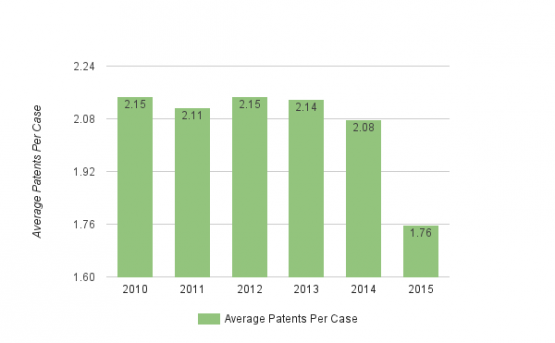 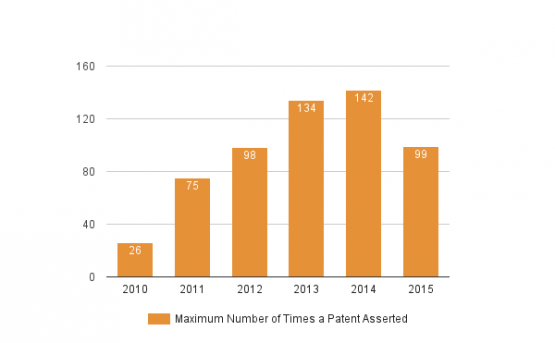 For the same reasons mentioned earlier (i.e., the joinder rule), the average number of times a patent was used in multiple lawsuits also increased substantially. In 2010 – and before AIA – each patent was used on average in 1.43 lawsuits. However, this number increased substantially post AIA, as predicted by many experts. In 2015, the average number of times a single patent was used in multiple cases grew to 2.76 for a 93% increase since 2010. This number was 2.05 for the first half of 2016. 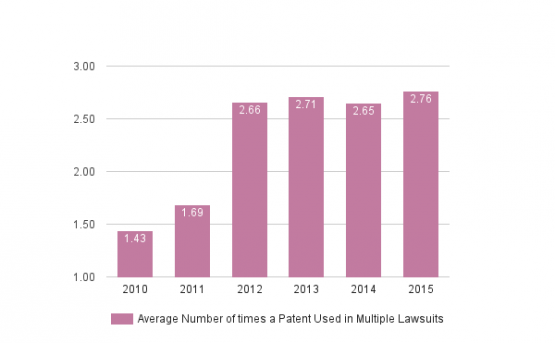 The analysis of unique patent numbers asserted each year surprisingly suggested a decline since 2010. This is an important measure, because it shows that the rise in the number of lawsuits reported by many studies is the result of only a few players (plaintiffs) who had to file many cases due to AIA and joinder rules. Additionally, although it was assumed by many experts that the number of patents per case will increase over time in order to reduce the risk of invalidation through IPR, that number has not changed significantly. In fact, it dropped last year.

We would like to point out that to obtain these charts, our staff manually reviews every complaint and adds the patent numbers asserted in each complaint to the corresponding case in our database. Therefore, we are not ruling out the possibility of human error, which may have occurred in the manual review of hundreds of cases every week. More than 50,000 cases since 2005 are accessible and our readers can search and review them for free onPatexia Research Platform.