The race is on to gain control of a new technology that has the power to reinvent banking and make transactions and other agreements between parties cheaper, safer and easier to complete.

Like disruptive inventions that preceded it, blockchain has businesses, large and small, jockeying for leadership. This means that patents are likely to play a significant role.

Blockchain is a shared database of transactions and other information, which is open to all and controlled by no one. It also can function as an autonomous semi-private network.

Blockchain began life as the trading infrastructure that permits secure recording of payments for bitcoin, the fledgling crypto-currency. But in the right hands the technology is capable of much more. A blockchain can handle complex transactions, even entire contracts.

It is no surprise that competition is building for patents that go beyond bitcoin and cover inventions that support a distributed public ledger. Call it blockchain 2.0. The race among a variety of disparate players is not likely to be a repeat of the smartphone wars, but it does have the potential to create an IP licensing windfall for early movers, leaving some volume users to pay unanticipated royalties.

The shared nature of blockchain (see diagrams below) makes it unlikely that any one or two players will explicitly control the technology. However, that will not prevent some patent holders from trying to profit. 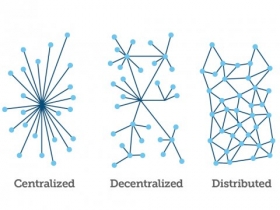 The blockchain is a public database that by-passes money-based payments by recording all transactions digitally. It forms the core of bitcoin and other crypto-currencies by maintaining a decentralized record of all transactions. Proponents say it has the potential to disrupt financial services by making payments and the settling of securities transactions, in particular, far cheaper. Reuters reports that financial institutions alone are expected to invest $1B this year and next in developing blockchain.

Some companies, like IBM, are hoping for a more open system, in the vein of Linux, while others, mostly software developers and some banks data carriers, are looking to have an IP leg up on the competition and to keep the technology at least somewhat proprietary. This would give non-financial and other players a chance to profit from licensing and encourage more investment.

The story of blockchain and its early promotion as the technology underlying bitcoin is fascinating if not mysterious. It appears to start with Craig Wright, who claims to be the pseudonymous creator of bitcoin, Satoshi Nakamoto. Wright, an Australian, recently announced that he has filed 50 blockchain technology and crypto-currency related patents in the UK. Why the UK? That’s another question. And why has Wright announced his applications rather that wait to for them to issue or publish?

Where there are bitcoins and other crypto-currencies, reports, CoinDesk, an industry publication, there are patents, which could be worth far more than the currency if found to be valid and infringed. However, these patents will be difficult to prove valid. The USPTO and most courts (after the Supreme Court’s 2014 decision in Alice) are now taking the position that most software is not inventive, and merely automates previously established inventions.

However, not everyone agrees. Two Hogan Lovells attorneys say that “Viewed as providing an improved computer data structure, [our] proposed bitcoin method claim should be precisely the type of improvement to computer functionality that is still patentable under Alice.”

Blockchain patent applications have generated an unusual amount of publicity. Whether these patents will issue or if they are capable of sustaining validity upon PTAB and district court scrutiny is unclear. Business Insider obtained a copy of the US patent, filed on May 10, for a passcode blockchain that Verizon has apparently been working on for three years.

“There is quite a bit of excitement about having digital rights on a blockchain-type system. It could allow for pay-per-usage, for example, while smart contracts — the contractual clauses that form part of a transaction — could provide automatic payment distributions,“ according to a Moody’s Investors Service report.

“A blockchain of digital rights for consumer products — music and news articles, among others — could ensure that artists or authors are paid immediately once a consumer reads an article or listens to a song, with funds proportionally distributed as per contractual clauses.”

Goldman Sachs is among the big banks excited about the blockchain. Thirty banks have now signed up to the R3 or R3CEV partnership. R3, based out of New York, is trying to establish industry-wide standards and protocols for using the technology, as well as exploring potential use cases.

Business Insider’s coverage of blockchain is very useful for getting a handle on how it works and may be applied. Go here for a stream of articles with useful diagrams, including the triptych in this post.

Establishing standards for blockchain will also be difficult.

R3 CEV, a startup working in blockchain which launched in September 2015, reports the Wall Street Journal, named the project Concord for the harmony it hopes to build among more than 60 banks participating in the project. The consortium originally started with nine multinational banks. The group currently includes Barclays PLC, Goldman Sachs Group Inc., and J.P. Morgan Chase & Co. 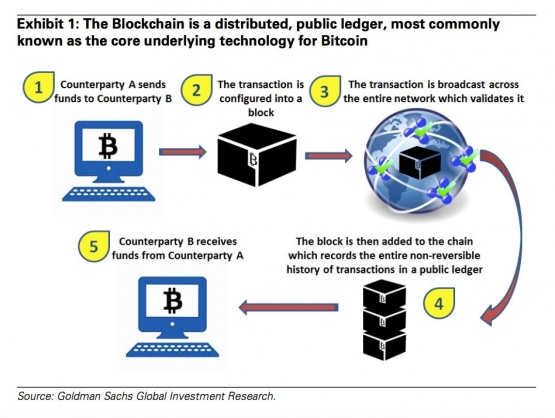 “Perhaps the most important difference between Concord and bitcoin and ethereum is the way transactions are recorded. With bitcoin and ethereum, every transaction is recorded, verified and disclosed immediately in their public, distributed ledgers. With Concord, while the transaction is verified via a distributed ledger, it isn’t publicly disclosed. The details are shared only by the parties involved.

“Figuring out the best way to use blockchain-based tools in the financial-services industry has become a hot topic. A number of firms, including Digital Asset Holdings, HyperLedger Project, Ripple, Microsoft’s Azure, and others are all working on products to take advantage of the new technology.”

A number of companies of various types and sizes have filed blockchain or related crypto-currency patents. The emphasis on patent applications, as most people in the IP world know, is more style than substance. CoinDesk reports eight companies filing and Quatrz comments on ten Bank of America’s patent applications publishing on December 17.

Leading patent recipient IBM is taking a more holistic approach to blockchain, integrating it under a recently announced new business unit, Industry Platforms, that includes cloud computing and artificial intelligence, and that will work closely with the financial services and other industries.

Industry Platforms will have company-wide responsibility for blockchain research and development, according to CoinDesk, in addition to helping foster open technology standards with the stated goal of accelerating market adoption. Project-based innovation leveraging open source technology has had great success in avoiding litigation in the core technology generated by these projects.

The new unit represents the next phase in IBM’s blockchain initiative, building on past activities that have resulted in a range of prototypes, and play a leading role in the Linux Foundation-led HyperLedger Project. In parallel and with the support of R3, HyperLedger is the largest and most organized Blockchain initiative.

“Blockchain’s design prevents the owner of a currency token from committing fraud by spending it twice,” reports Bloomberg Business Week. “The first spend is recorded for all to see, so no one would ever accept a second spend. 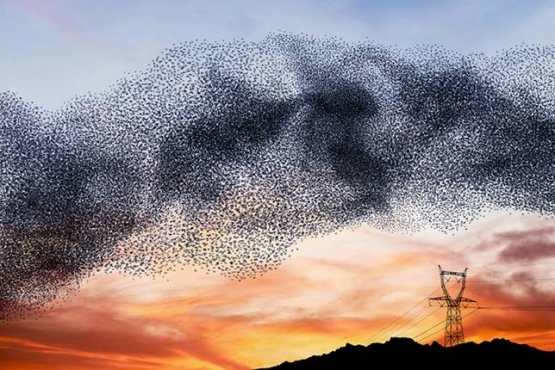 “The truth-telling feature of blockchain makes it enormously useful to banks, which have been among the first to start testing it. Microsoft launched blockchain as a service last year. Smaller companies are building dozens of apps on blockchain, such as one for musicians to track and collect royalties on their works.”

“The poetic vision of a blockchain society is a flock of starlings at dusk: decentralized yet perfectly coordinated. Blockchainers like to show video clips of murmurations—those enormous clouds of birds that pivot and wheel, climb and dive, split and merge with amazing grace. Blockchain, in this vision, could replace gobs of bankers, accountants, and lawyers, as well as escrow accounts, insurance, and everything else that society invented pre-21st century to verify payments and the performance of contracts.”

The promise of blockchain to streamline important, voluminous tasks is uniquely important to IP holders. It could provide an opportunity to copyright and other IP dependent businesses and individuals (patent holders, too) to track and receive incremental payments that in the past were difficult to comprehend; blockchain could serve to minimize disputes in ways that the courts and PTAB have not.

Right now, no one really knows what blockchain has wrought or what it is capable of, but there is a strong feeling that the distributed public ledger technology can be a catalyst for new ways of doing business, and that IP rights will play a role. There are a lot of businesses pulling for blockchain to succeed, and hoping that it will be will be readily shared.