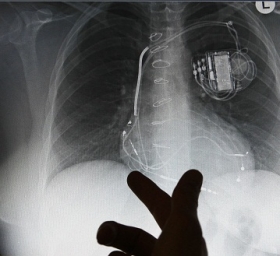 A team of engineers at Stanford University, in new research published in the Journal of Applied Physics Letters, have reported the development of a tiny (millimeter-scale), implantable cardiac device no longer powered by batteries, but rather by radio waves outside the body.  It is contained in a cube eight tenths of a millimeter—the size of a pinhead!  It is placed 5 centimeters inside the chest on the surface of the heart, a surface once thought impossible for wireless transmission.

Anywhere from hundreds of thousands to millions of implantable medical devices, ranging from pacemakers to cochlear implants to drug pumps, have helped to heal people as miracles of medicine, no longer immobilizing people who once would have been hospital or bed-ridden.  Nevertheless, there are downsides to how medical devices are currently powered, namely batteries.  Powering through batteries requires bulk and a finite lifespan, requiring more surgery.  (Interestingly, scientists are investigating the possibility of powering these devices through excess blood sugar stored in the human body!)

Led by Dr. Ada Poon, and her colleagues Sanghoek Kim and John Ho, the new cardiac device works through an electromagnetic combination of inductive and radio waves sent by a transmitter to a coil implanted inside the body.  Previous scientific consensus was that wireless technology couldn’t penetrate the human body because if radio waves are used, there is an inverse relationship between coil size and power.  Therefore, a high frequency requires a small coil, while a lower frequency (which is used to power these devices) requires much too large of a coil.  Dr. Poon’s mathematical model proved these estimates wrong by complimenting radio waves with inductive waves.

The revised models show that maximum power transfer occurs at 1.7 billion cycles per second, an increase of ten fold over previous models.  This also meant that Dr. Poon’s group could shrink the size of the antenna by a factor of ten as well, making implantability feasible for the first time ever.  A millimeter-size coil, for example, can harvest greater than 50 microwatts of power, well in excess of the power required by current battery-powered heart implants.

Despite the team’s tremendous solution to the mathematical and spatial implantation challenges, they faced two primary engineering constraints to the cardiac device.  The first is that the IEEE sets extremely stringent standards for implantable medical devices, especially with regard to (over)heating within the body.  Secondly, in the first prototype build by Dr. Poon and her team, the receiver and transmit antenna had to be aligned just so in a specific angle to achieve optimal efficiency.  The moment they lost alignment by just a few degrees, the team noticed a “troubling” drop in power efficiency.  Given that the human body is in constant motion, this had to be solved in order to make the device practical for clinical applications. 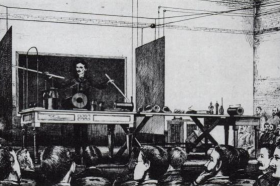 The team responded by designing a “slotted transmit” antenna structure which delivers consistent efficiency regardless of orientation.  Dr. Poon has applied for a patent on the redesigned structure, which has solves the aforementioned heating constraints by focusing radio waves precisely at the point in the body where the implanted device is located, thereby reducing heat in surrounding areas.

The biomedical impact of this scientific advance is tremendous.  Dr. Poon’s hope is that the implantable heart device is only a launching pad towards the development of general wireless implantable devices. To wit, Patexia posted a story a few weeks ago about a wireless sensor now implanted in pills that functions to allow tracking of medicine regimens.  Another great example is endoscopy for digestive tract monitoring.  Although it has come a long way from the 1950s, when it was first developed, and can now be done virtually thanks to the development of CT and MRI technology, endoscopy continues to have challenges, including quality control and training of physicians to interpret high-tech machines.  The ability to implement a simple, effective wireless endoscopy procedure to supplement or replace invasive barium enemas and colonoscopy exams, saving time and money.

Future research efforts in this area will be geared towards the development and furthering of wireless medical device revolution.