In the complaint, Clinch claims exclusive rights and ownership of U.S. copyright registrations over the two Tupac photographs, and further claims that he had never granted permission to Planet or Amaru to license them on his behalf. Clinch also asserts that Amaru made false representations as to ownership of the registrations, and that Planet did not undertake sufficient due diligence to confirm said ownership. As a result, Clinch sued the defendant retailers, manufacturers, and licensors involved in the production and sale of the t-shirts. Clinch demands an end to any further production, distribution, or sale of the t-shirts or any other merchandise using the photographs, the delivery and destruction of all such merchandise to Clinch, an accounting of Defendants’ proceeds (estimated to be over $600,000), and legal fees. At this time, the Defendants have yet to file an answer to Clinch’s allegations.

This is not the first time Urban Outfitters and Forever 21 have been subject to copyright infringement suits. In April 2017, the Ninth Circuit found Urban Outfitters to have willfully infringed a copyrighted fabric design, to the tune of about $530,000 in damages and costs (for more info about this case, see here). In 2016, Forever 21 was sued over fifty times for copyright infringement and other intellectual property claims. Without passing judgement on either company, the frequency of such suits and the relatively high award amounts underscore the significance and impact of copyrights on the fast-fashion retail market.

These lawsuits also serve as a reminder that even with significant damages at stake, the legal costs can be high, and may affect the ability of an average copyright holder to enforce their rights against accused infringers. For example, the above-mentioned $530,000 award in the 2017 Ninth Circuit decision against Urban Outfitters was split between about $160,000 in willful damages, and $360,000 in legal fees and costs. In the present case, Danny Clinch is a renowned photographer whose subjects have also included Bob Dylan, Johnny Cash, Bruce Springsteen, Beyoncé, and Taylor Swift, and who likely has the financial resources to pursue a copyright claim. An artist of lesser reputation may not have the means to defend his or her rights, or might need to seek a contingency-fee based attorney to take action.

Clinch’s suit also underscores how celebrity-related intellectual property can maintain its value long after the celebrity is deceased, even to third parties unrelated to the celebrity’s estate. The present case suggests that copyrights of Tupac’s photographs could carry a value approaching one million dollars in damages, fees and costs, more than twenty years after Tupac’s death, even though his estate is not a listed party in the suit. It is widely known that the biggest earners in music in recent years include the estates of deceased icons such as Michael Jackson and Prince. For example, in 2016 alone, Jackson’s estate made nearly one billion dollars. With such large amounts of money at play, it is not surprising that there is also a large amount of litigation peripheral to the estates of famous celebrities such as Tupac. Thus, the manner in which artists’ estates or interested third parties protect and regulate the use of artists’ likeness and intellectual property can impact the fashion industry.

Clinch’s suit also brings to mind various complexities inherent to licensing, ownership of copyrights, and rights of publicity. For example, a photographer would by default own the copyrights in his or her photographs of a famous musician. However, if the photographer took the photographs on behalf of another entity, such as a magazine, then the magazine might own the copyrights under a work-for-hire theory. Furthermore, the artist or the artist’s estate may have publicity rights to the artist’s likeness in the photograph, even without ownership of the copyright itself. Any of these rights may have been granted to a third-party that specializes in licensing the images for use by various other parties. These complex ownership issues coupled with the fact that many creative works are not registered in the U.S. Copyright Office, can create great difficulty for fashion companies seeking to properly license images of famous artists. Thus, the expense and effort involved in clearing the use of a single photograph to be printed on a t-shirt can be a multi-step, costly legal process.

The more parties involved in the transfer of intellectual property rights, the higher the risk of suit can be for each party due to the complexity and difficulty in determining who owns which rights. Even though good faith attempts at rights clearance may mitigate damages based on willfulness, fashion companies still run the risk of being pulled into complex lawsuits along with their manufacturers and licensors. For plaintiffs believing they have been harmed, it can be difficult to determine, without the benefits of discovery in a lawsuit, which of any number of defendants in the licensing and retail supply chain might be at fault. Thus, plaintiffs often name a number of defendants in the supply chain under various direct and vicarious liability theories, to cover their bases. This may be the scenario in the present case. According to the complaint, Planet and Bioworld both manufacture, distribute, and sell apparel items. Amaru holds itself out to be the official agent of the trademark and images of Tupac, and Urban Outfitters and Forever 21 are both fashion retailers. Based on the facts presented by Clinch, Planet and Bioworld had a license agreement for the right to produce, manufacture, and distribute photographs of Planet’s music artist clients, including Tupac. In another license agreement, Amaru granted Planet a license to use photographs of Tupac, including the images at issue, on apparel. Planet then added photographs of Tupac to its licensing agreement with Bioworld. Planet and Bioworld then produced, distributed, and sold the photographs at issue on t-shirts, which were in turn sold to Urban Outfitters and Forever 21 to market, distribute, and sell to consumers. 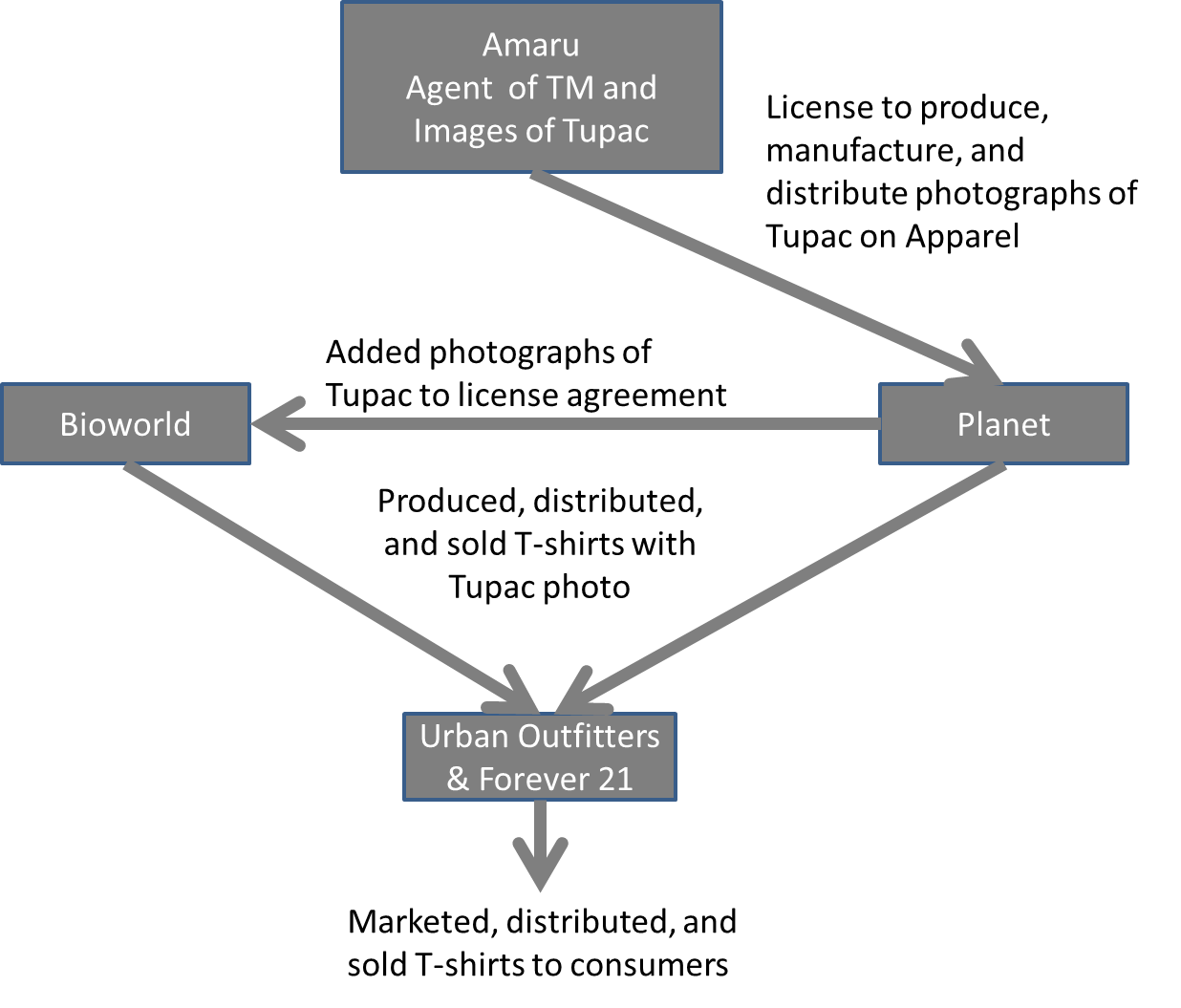 Here, the complaint alleges the license obtained by Planet from Amaru was not valid because Clinch never gave permission to Amaru to license the photographs on his behalf. As a result of this contested initial licensing relationship, five separate defendants, including those much further down the supply chain, were pulled into this complex case. Although Urban Outfitters and Forever 21 may have believed their manufacturers had a valid license to produce the Tupac t-shirts, they nonetheless became named as defendants in this potentially costly suit.

For fashion companies interested in using photographs on apparel and other products, this case underscores the importance of carefully clearing rights for images prior to use, obtaining indemnity agreements from licensors, and monitoring the litigiousness of artists’ estates in order to manage an acceptable amount of risk. With these steps in place, fashion companies can reduce the risk of potential plaintiffs from getting “mad at cha” and filing suit.