Search
James Lee PhillipsAug 17, 2012Science and Technology
Can you believe in the Ouya? 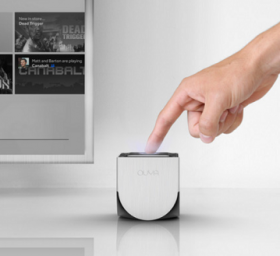 Gamers, take notice. There's a new player in town, and it's name is Ouya. It has an impressive recent past with Kickstarter, an intriguing present, and a future whose possibilities range from the laughably dismal to the revolutionary (or, as my executive friends might say, "paradigm-shifting").

Ouya. Intriguing name, isn't it? Exotic, almost spiritual, but with a certain hint of boisterousness (rhymes with Booyah!). However, the developers caution us that it's potentially offensive in Swahili, although none of my Swahili-to-English dictionaries bear that out. To all of my potentially offended readers in Kenya and Uganda, all I can say is: "Samahani."

At the very least, Ouya is a stunning example of the potential of crowdsourced funding.

Aside from the details of the console itself, Oua has achieved a few impressive stats already. No single Kickstarter entry has matched Ouya for rapid growth; in just under 8.5 hours, Ouya had joined the rarefied ranks of million-dollar projects AND went on to have the biggest first day in Kickstarter history (over $2.5 million). In both cases, second place went to Tim Schafer's Double Fine Adventure, which (despite being helmed by a game dev legend) took over twice as long to become a millionaire.

From Marillion to The Tunnel to the JOBS Act, crowdfunding has emerged as a major alternative to traditional investment. The pros and cons of the micropatronage model is beyond the scope of this article, but the questions of equity and intellectual property loom over the grass-roots appeal of Kickstarter, IndieGoGo, and other channels. As long as crowdfunding can overcome or at least avoid these concerns, there is every reason to hope that such venues can offset billion-dollar R&D -- ultimately resulting in a market with a healthy system of checks and balances for ventures big and small. For every Wii 2, an Ouya. For every Call of Duty: Modern Warfare 3, a Double Fine Adventure.

So what, specifically, does Ouya have going for it? 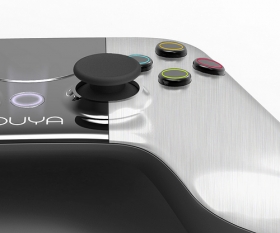 Quite a lot, really... and maybe not just for gamers. For one thing, it's cheap. Dinner for two at an upscale chain restaurant cheap. Two Xbox360 games cheap. Fire-sale HP TouchPad cheap. This wouldn't be a virtue if the product wasn't desirable (right, Coby?), so let's move on to reasons why you'd want one, and leave the bargain-hunting aspect as a secondary consideration.

In a gaming climate where PC and console developers alike are wringing their hands about the threat from mobile devices, Ouya provides a wonderful compromise. It's an Android console at heart, meaning that you can play Angry Birds on your big screen TV. The controller has a mini touchpad (3") for all of those multitouch gestures, as well as analog sticks and buttons for those used to a traditional gamepad.

Perhaps more compelling to would-be developers, it's open-source. You don't need to buy a development kit and/or licensing from the company to make games and apps for the Ouya. Anybody who plays with the Android SDK on a regular basis will appreciate having an Ouya around. And it's common wisdom that the most creative game designers are gravitating toward the touchscreen mobile environment.

Getting over the hump.

OK, so following a new contender in the game console market is a bit like getting excited about a third-party candidate for U.S. President. No matter how much fun it may be, no matter how reasonable it sounds, you just know that only disappointment is ever going to come of it.

But we've been wrong before, haven't we? Prior to 2001, if you'd told anyone that Microsoft could have gone up against Nintendo, let alone Sony, half the world would have laughed in your face (and the other half wouldn't have known what you were talking about). Fast-forward ten years, and Sony is having a hard time keeping up with the Xbox360 (and Nintendo has too many of their own problems).

Consoles face an extremely vertical slope toward success. Microsoft sank billions of dollars into the Xbox before it became a money-maker for Redmond. The Catch-22 is that you need success to attract developers, and you can't have success without some very good games (Microsoft's ace in the hole was Halo, but third-party devs stayed wary even after the landmark FPS became a massive hit).

The same period that saw the rise of the Xbox also saw the failure of at least three other grabs for the console gold ring. The AppXtreme, The Phantom, and most significantly, the Indrema. The latter promised open-source development without a need for an expensive development kit, allowing for free software -- from games to entertainment center applications. In contrast to the Ouya, the Indrema never made it past the early prototype / vaporware stage (and even if it had, it couldn't have possibly offered such a compelling price point).

Ouya's specs resemble a high-end smartphone. Running the latest Android OS (4.0, a.k.a. "Ice Cream Sandwich"), the guts include a quad-core A9 CPU, Tegra 3 SoC (including the ULP GeForce GPU that enables impressive gaming and video capabilities), one GB of RAM, and 8 GB of flash storage.

The connectivity begins to improve on the typical smartphone, however; although the WiFi and Bluetooth are a given, the Ouya also features Ethernet, USB, and a 1080p HDMI video out.

Critics have pointed out that the Tegra 3 hardware will be outdated by the time the Ouya starts shipping. It's a fair point, but consider that gamers are still buying the PS3 and Xbox360 five or six years later -- both of which had specs that didn't quite measure up to a good gaming PC even when they were first released. And that's not even considering Nintendo, which hasn't bothered to keep up in the specs department for many years. If nothing else, the Wii proved conclusively that you could have a mainstream console success without worrying about cutting-edge graphics and processor speeds.

We weren't going to stress the price angle, but even "achieving mainstream" isn't as much of a necessity for a console that sells for around $100. A healthy market segment among a few niches would be more than enough to justify the Ouya (think GameCube-era Nintendo, for example). A lot of the comments from the gaming community have included the word "emulator." There are legions of gamers who would jump at the price, if for no other reason than to have dedicated access to classic games for Nintendo, Sega, Atari, arcade, and even older Sony platforms.

Perhaps the Ouya is a bit more than just fun and games?

Take another look at the connectivity specs and the app compatibility of the Ouya. The real value of the console may come into play well beyond the gamepad. Everyone from Apple to Google to LG is scrambling to get TV's connected to the 'net and running apps. Considering that the Ouya comes standard with a 1080p HDMI output and Andoid compatibility, you get a Smart TV solution for any HDTV you may already have.

So Ouya is not just a potential competitor to Microsoft, Sony, and Nintendo, but also to Smart TV manufacturers, Roku, Google, and especially Apple TV -- and at virtually the same price, Ouya could find itself in the classic third-party situation that allowed Microsoft to dominate Apple in the desktop world for over two decades.

Can you believe in the Ouya?

It's tempting, even if you're not much of a gamer, to get behind the groundswell of an underdog. From a purely market-based outlook, you want the playing field challenged by innovation and new approaches to competition. From a consumer perspective, you want affordability to include real value and unique benefits. In an admittedly narrow way, Ouya has dared to challenge the mighty -- and undoubtedly, thi15s sets up a lot of people for a lot of potential disappointment. The only real winners may be that segment of the tech media that loves pouncing on failure. But whatever happens from here on in, Ouya has already become a symbol of the possibilities of 21st Century ingenuity and crowd-sourcing. It's already a modern success story, and it hasn't even gone into production yet.