A little over a year ago, the patent-eligibility of software inventions was very bleak. Examiners maintained difficult Alice-based rejections (rejecting the claims as abstract ideas, judicial exceptions to patent-eligibility) and applicants had little choice but to keep churning through RCEs, abandon or appeal. Today we are seeing a fundamental shift in the USPTO’s approach to the patent-eligibility determination, as reflected in ex parte appeal PTAB decisions.  These appeal outcomes are showing a trend toward Step 2A being a winning argument for overcoming abstract idea rejections at the Board.

The PTAB appeal outcomes show a dramatic increase in total reversals and the percentage of reversals for abstract idea rejections. Data from Anticipat.com (a database that catalogues by issue and subissue the appeal outcomes for each ex parte appeal decision at the PTAB/BPAI) shows that the PTAB is responsive to changes in the case law and guidance at the USPTO. That is, when applicant-friendly case law or when applicant-friendly examination guidance comes out, the PTAB correspondingly reverses more abstract idea rejections.

For example, in January and February of 2018, the data from Anticipat shows that the PTAB reversed Abstract Idea rejections at a dismal rate of only 10% of the time. To show how dismal this reversal rate is, other rejections such as Section 102 and 112 get reversed 50% of the time by the Board. But a series of positive developments began to move the PTAB in a more appellant-friendly direction. In February of 2018 a trio of Federal Circuit decisions (including Berkheimer) made it more difficult for Examiners to show that claims do not recite an inventive concept under Step 2B. And the PTAB was listening. Reversal rates and total numbers of reversals for abstract idea rejections rose at the PTAB post-Berkheimer.

While it took some time for these developments at the USPTO to change the overall reversal rate for abstract idea rejections, recent months have seen significant increases in the reversal rate for abstract idea rejections. Part of this may be that the PTAB appears to be responding to policy changes at the USPTO. Newly appointed USPTO director Andrei Iancu began immediately pushing for changes in the guidance given to Examiners regarding patent eligibility. This push eventually culminated in the release of the new Section 101 examination guidance effective January 9, 2019 (shown in the graph in yellow) that represents a truly different level of reversing abstract idea rejections from the previous year. Following the implementation of the guidance, almost immediately Board panels started citing to the guidelines in their analysis and the result on reversals was immediate, as the figure below demonstrates. 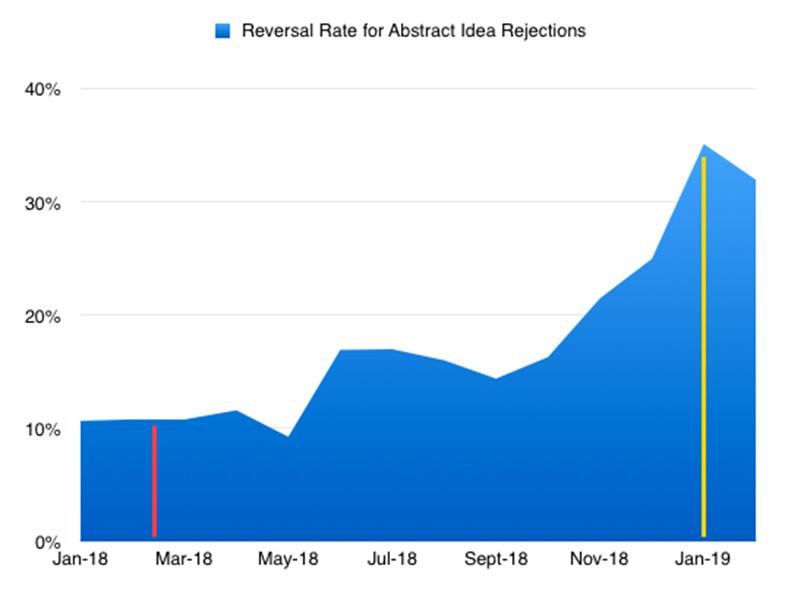 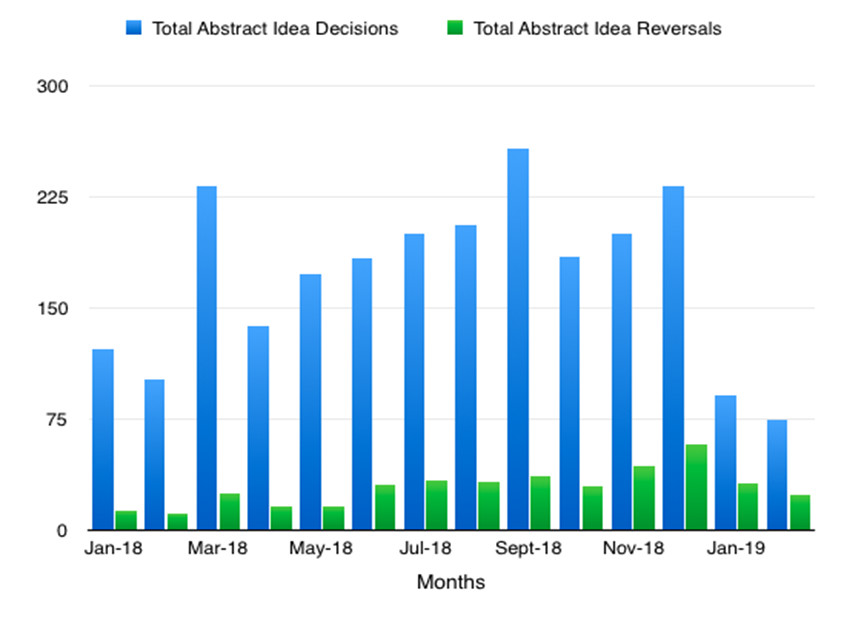 For some context, October 2018 saw a high number of abstract idea reversals but still managed only a 16% reversal rate.  December saw almost double the number of reversals from October but only at a 25% reversal rate.  While January and February so far do not look to have the same number of decisions involving abstract idea rejections, this reflects that historically the PTAB starts off the year slow. In fact, at the time of publishing this article February still has decisions that are awaiting release to the general public.  However, the reversal rates for January and February, 35% and 32%, respectively, are double the October 2018 reversal rate.  This significant increase in the reversal rate suggests that what we are seeing is a baseline shift in the PTAB’s approach to the abstract idea analysis and a sustainable trend—not a sample size anomaly.

Another key aspect of the changes observed in ex parte appeals abstract idea reversals coming from the PTAB is in how the reversals are taking place. Shortly after Berkheimer, which placed more of a burden on the Examiner to maintain an abstract idea under Step 2B (Step 2 of Alice/Mayo), the PTAB reversed generally equally on Step 2A and Step 2B grounds. That is, for every decision in which a panel relied only on Step 2A to reverse the examiner’s rejection, there was another decision that relied only on Step 2B.

Recent examination guidance, which the PTAB is bound to follow, changed the analysis in such a way that the Step 2A analysis tilts more favorably toward applicants. No longer can examiners loosely assert that a claim is directed to an abstract idea by analogizing to one of the many dozens of court cases decided since Alice. Now the examination guidance requires in the bifurcated Step 2A analysis in prong 1 that the elements of an abstract idea be either a mental process, method of organizing human behavior, or a mathematical relationship (narrowly construed).

On top of this, Step 2A now requires under prong 2 that the claim still be considered as a whole as to whether the claim reflects a practical application resulting in some form of a technological improvement. All in all, the Step 2A analysis, which Examiners are now required to follow, has serious ability to defang an abstract idea rejection, especially those applied even a year or two ago.

As can be seen from the below graph, the PTAB has immediately seized on using Step 2A in favor of Step 2B in its reversals since the implementation of the guidance in January of 2019. 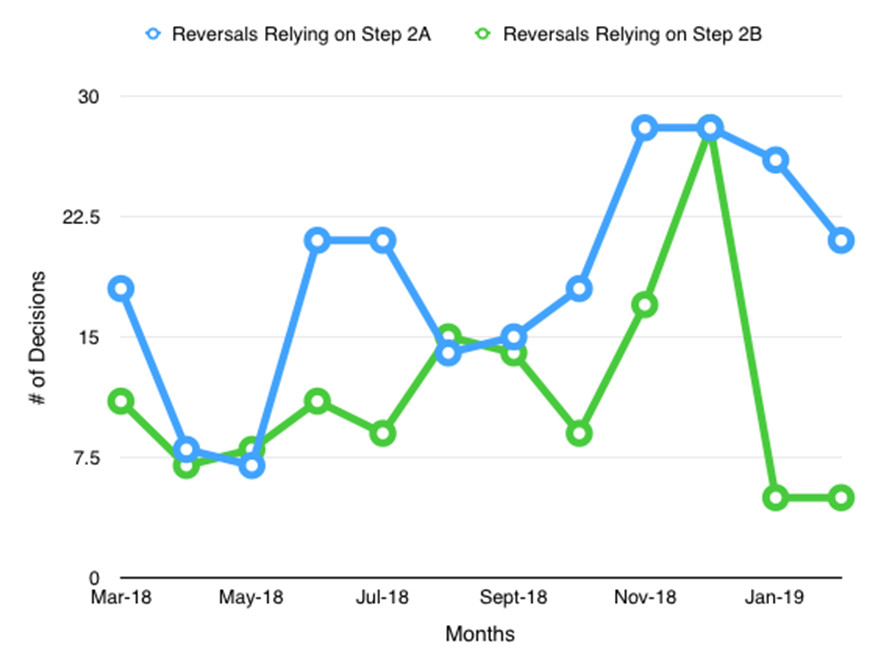 The PTAB’s reliance on Step 2A clearly stems in part from the revised examination guidance, which panels almost immediately began citing to after the new guidance was effective. Another reason for the shift in use is judicial efficiency. Once a rejection has been shown to have error under Step 2A, there is no reason for the Board panel to have to proceed with any analysis under Step 2B.

The data coming from the PTAB as reflected in the Anticipat database shows that Applicants would be wise to follow the trends at the Board in arguing against Section 101 rejections. Currently, with the new revised guidance in effect, Step 2A is demonstrably a powerful way that the Board has using to reverse abstract idea rejections. If the PTAB is reversing such rejections at a relatively high rate, applicants (even if a case is not on appeal) would do well to identify all possible arguments at Step 2A rather than focusing on Step 2B.  Such an approach for arguments in a pending case will mirror how the new guidance is being used by the PTAB to reverse abstract idea rejections.

Expect the PTAB to continue to reverse improper Section 101 rejections at a higher rate as it has a tail wind at its back given the new guidance was not applied by Examiners in nearly all currently pending abstract idea appeals. This trend could benefit the entire patent bar at least for predictability sake. Just by virtue of the Board making decisions over a more diverse set of applications than the courts get to see—and correspondingly having more “shades of gray” to work with—the PTAB is in a good position to continue to shape patent-eligibility at the USPTO.  If the Precedential Opinion Panel delivers on its promise to issue more precedential decisions from the PTAB, we could see further refinement of the Section 101 analysis in as soon as the next few months.  All things considered, things are looking much more promising in 2019 for patent prosecutors facing a Section 101 rejection than they did just last year.