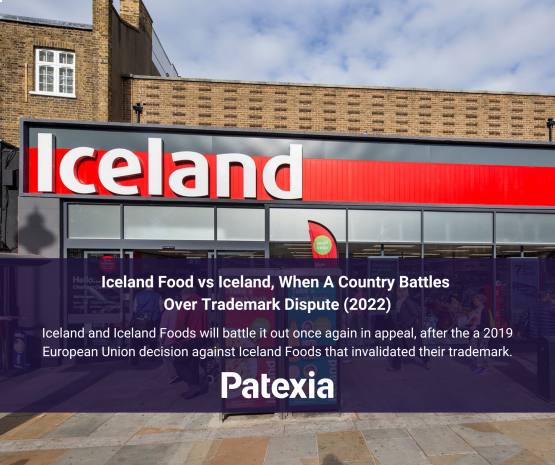 A case filed to the Grand Board of the EU Intellectual Property Office (EUIPO) on September 9, 2022, will be added to an ongoing and prolonged legal battle between the country of Iceland and the British supermarket chain Iceland Foods over the trademark rights and use of the name "Iceland." The EU Trademark Directive already has some prohibitions regarding the registration of national flags and emblems as trademarks. However, there is nothing specified when it comes to using country names as part of the trademark.

Iceland Foods, founded in 1970, has fought for years to trademark its name after the nordic island. They first applied to trademark the name in 2002, and only after several attempts was it finally granted to them in 2014, despite the strong opposition of the country of Iceland, whose government wasn't happy about this decision. In 2015, the dispute heated up because the supermarket tried to stop the trademark “Inspired by Iceland” and "Íslandsstofa" by thinking that these were commercial entities while these names were used by Icelandic businesses to advertise their products. The government of Iceland accused Iceland Foods that it was abusing its rights by trademarking the name of their country and creating a lot of problems for Icelandic companies by pursuing legal action due to the use of their own country's name on their products. After considering legal action, in 2016, the government of Iceland filed a lawsuit at the European Union Intellectual Property Office requesting the invalidation of the trademark. They argued that this registration was an issue for Icelandic businesses and that it was unusual that a supermarket chain could hold a stronger claim to the trademark than the country itself.

The supermarket responded to the Icelandic government’s legal action by saying that no major conflicts or confusion existed due to this registration and also claimed that the government was unwilling to negotiate a settlement agreement. Furthermore, they never intended to block any Icelandic business that trademarked their products, as long as it didn't create confusion with the supermarket’s products. After three years of legal battle, in 2019, the EUIPO invalidated the trademark, which was considered a milestone for the Icelandic exporters. Iceland Foods, however, warned of an appeal at that time, and this is what has happened now, with the decision being challenged at the Grand Board of EUIPO, the European bloc’s trademark authority.