Search
Mikele BicolliNov 17, 2022Legal
Jury Decides that VLSI Should Get Another $948.8 Million from Intel Over Patent Infringement 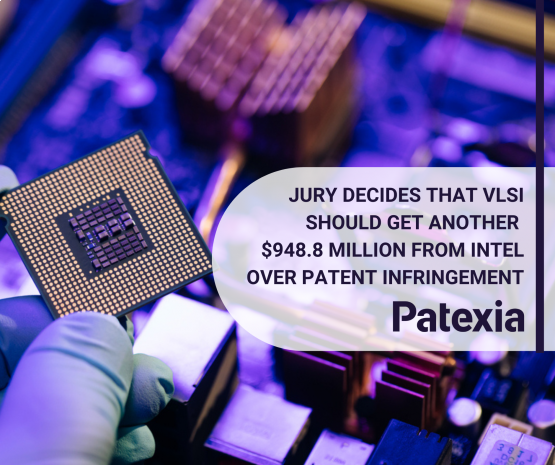 There had been only two cases where damages over $2 billion have been awarded in a patent litigation case, in Pfizer vs Teva Pharmaceuticals (TEVA) & Sun Pharma (2013) – $2.15B and in Idenix vs Gilead Sciences Inc (2016) – $2.54B. The entire IP community’s attention was focused on a single case last March when a jury from Texas ordered Intel to pay $2.18 billion over a patent infringement case, making it the third time a defendant was ordered to pay over $2 billion and the second-largest patent damage ever awarded. This decision came from just one of the several lawsuits filed between Intel and VLSI as part of a patent battle being litigated in California and Delaware as well as in Shanghai and Shenzhen in China. Just yesterday, a decision from another jury in Waco, Texas became public making the headlines as Intel was hit with another $948 Million verdict for infringing another patent of VLSI.

A quick investigation with Patexia’s Litigation Analyzer indicates multiple lawsuits dating back to 2017 when VLSI filed suit against Intel alleging that their products infringed several of their patents. As part of its defense strategy, Intel responded by initiating multiple Inter Partes Reviews in order to invalidate these patents. On April 11, 2019, VLSI filed the lawsuit in question against Intel alleging infringement of U.S. patents nr. 8,156,357, 7,523,373, and 7,725,759 related to memory cache in microprocessors. In the complaint, VLSI requested enjoyment of the plaintiff from further infringement as well as damages awarded. In the closing arguments this Tuesday,  VLSI’s attorney Morgan Chu of Irell & Manella LLP said that Intel infringed U.S. Patent nr. 7,606,983, which covers an invention that helps keep information flowing through computer processors. After lengthy litigation, on November 15, 2022, the jury decided that VLSI had proven more likely than not, that Intel has infringed claims 1 and 9 of Patent nr. 7,606,983, and Intel hasn't provided clear and convincing evidence which indicates that these claims are invalid due to anticipation. For these reasons, the jury awards VLSI $948,755,789.00 as a royalty for the past damages only, in the form of a lump sum.

The patent battle appears to be continuing as there are several lawsuits being litigated in district courts and before the PTAB for patent invalidation. This decision is likely going to be challenged further in the US Court of Appeals for the Federal Circuit. However, it comes at a bad time for Intel where they have just received notice that the CAFC has just partly reversed and remanded some decisions of the PTAB which invalidated U.S. patent nr. 7,247,552.

Attorneys Nathan Lowenstein and Kenneth James Weatherwax of Lowenstein & Weatherwax represent VLSI before the CAFC in the cases 2021-1826, 2021-1827 and 2021-1828 filed by VLSI to challenge several decisions of PTAB invalidating claims from their patents.

How do you think this battle will ultimately finish? Any sign of settlement between the parties that would terminate all of the ongoing litigation?