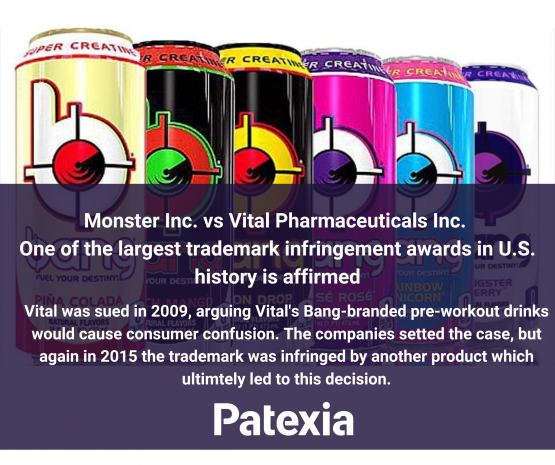 The verdict was affirmed just last month but the history of this case goes back to 2009. Orange Bang sued Vital Pharmaceuticals because they named their pre-workout drinks “Bang”. According to the Orange Bang, this was trademark infringement and was very likely to cause consumer confusion. In 2010, this case was settled and according to the agreement, Vital was allowed to use the “Bang” name on their drinks, if they were creatine-based and only sold in fitness shops or gyms.

In 2015, Vital launched “Bang Energy”, which was advertised as a drink with “super creatine”. However, Orange Bang argued this was a breach of the previous settlement, arguing that the drink wasn't creatine-based. Meanwhile, Monster Inc. had sued Vital in a separate case, claiming false advertising. Orange Bang teamed up with Monster while Vital filed a lawsuit against them requesting a ruling that the drink didn't infringe the agreement and the trademark. The court found Bang Energy's drink is not creatine-based because "Super Creatine" is not actually creatine and does not raise the body's creatine levels. Vital owes $175 million in damages and an additional 5% royalty on worldwide sales of Bang-branded products.

Congratulations to the attorneys of Orange and Monster for securing this decision! Monster was represented by John Hueston, Moez Kaba, and Allison Libeu of Hueston Hennigan. Orange Bang was represented by Steven Nataupsky, Lynda Zadra-Symes, and Matthew Bellinger of Knobbe Martens.