Search
Knobbe MartensJan 9, 2019Legal
New 101 Guidance from USPTO – What Does It Change?

On January 4th, the USPTO announced revised guidance for subject matter eligibility (Section 101 Revised Guidance) and stated it would take effect when published on Monday, January 7, 2019.

The guidance is addressed to Patent Examiners at the U.S. Patent and Trademark Office (or PTO)—the government employees that evaluate patent applications for compliance with title 35 of the U.S. Code.  This new guidance deals with Section 101 of that title—the threshold question of whether a patent’s claimed subject matter is within the realm of topics that are even “eligible” for patenting.  Courts have held that “abstract ideas” do not meet this eligibility threshold.

Consistent with PTO Director Iancu’s stated views, the new guidance emphasizes judicial precedent favoring eligibility under 35 U.S.C. § 101 and downplays cases that found claims ineligible.  The guidance states that its goals are to “increas[e] predictability and consistency in the patent eligibility analysis” and “increase consistency in examination practice.”(1)

It is now much easier and faster for Examiners to find claims eligible unless they are very broad and very abstract.  A contrary finding—particularly for a long and detailed claim—requires much more analysis, justification, and work by the Examiner.

The PTO outlined its old procedure with a flowchart.  Viewing the new guidance in a similar flowchart format, Examiners now have at least two additional “paths to eligibility,” labeled as paths C and D in the figure below.  Step 2A, prong 1(a) requires identification of “specific claim limitations,” a change that also favors patent eligibility. 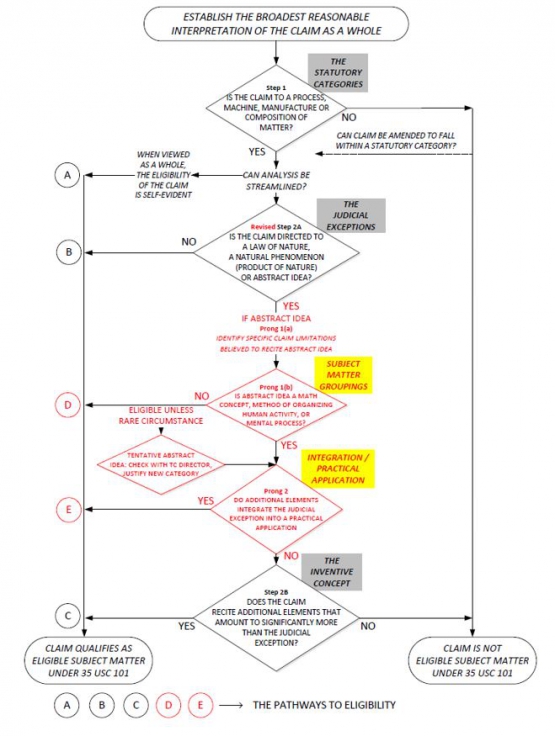 As evident from this chart, the new guidance changes the incentive structure for Examiners.  Eligibility is favored, with multiple off-ramps to this result.  In contrast, to find ineligibility an Examiner faces a singular and difficult gauntlet.  If applied as intended, this new guidance will generally result in more efficient (or “compact”) patent prosecution and lead to more consistent and predictable outcomes.  For those seeking patents, this is a welcome clarification and improvement.

While the guidelines cite and fairly summarize numerous relevant cases, it is not clear how the courts will react.  When findings of patent ineligibility have been appealed in recent years, the Patent Trial and Appeal Board has often cited the Federal Circuit’s Electric Power Group opinion to affirm these findings.  The guidance does not address this opinion, although it is discussed in parallel guidance on 35 U.S.C. § 112.  Thus, despite easier sailing at the PTO for patent eligibility, applicants should proceed with caution with an eye to obtaining patents that will also be enforceable in federal court.

(6)           Id. (“Because revised Step 2A does not evaluate whether an additional element is well-understood, routine, conventional activity, examiners are reminded that a claim that includes conventional elements may still integrate an exception into a practical application, thereby satisfying the subject matter eligibility requirement of Section 101.”)