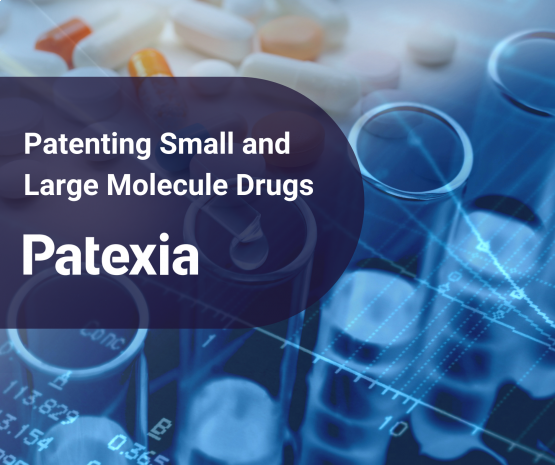 Small molecule drugs have been the norm for much of medicine’s history. Only in the past decade has there been a rise in large molecule drugs which also obtained FDA approval. When it comes to the world of pharmaceuticals, they are divided into two main groups: small molecules and large molecules, known as biologics. The difference between these pharmaceuticals begins with the chemical properties such as weight, continues with the manufacturing methods, and culminates with different patenting procedures and strategies.

Chemical Differences – Small molecule drugs are considered compounds with low molecular weight, typically less than 1000 Daltons. Think of aspirin and other “traditional” drugs that you can find in your home medicine cabinet. The small molecular weight is both an advantage and disadvantage in the eyes of the manufacturing company. Having a simpler chemical formula makes them more stable and easier to predict when it comes to effects. Furthermore, due to their chemical nature, they can be administered orally which gives a lot of flexibility to patients. However, as they are simple to manufacture after the patent protection expires, they will face a lot of competition. Typically, small molecule drugs consist of a single molecule and that is not hard to replicate when the formula is known. Another problem that comes with small molecule drugs is the resistance built.

Biologics or large molecules, on the other hand, have a very complicated structural shape, which ultimately makes them difficult to produce, time-consuming, and expensive. They are made with different heterogeneous mixtures of proteins and are used in different stages of disease such as prevention, treatment, or even to cure diseases. An excellent example of biologic drugs is vaccines as well as the antibodies used in cancer therapy to combat abnormally reproducing cells. The molecular weight of biologics is usually over 10,000 Daltons and may even go as much as 150,000 Daltons, which is quite heavy. Because of this, they are usually administered through injection.

Manufacturing Differences – The manufacturing process for small molecule drugs encompasses therapeutic design and development, target identification and validation, lead discovery, lead optimization, pre-clinical development, clinical development, and commercial adoption. Having a simple and well-defined formula makes the small molecule drugs easy to manufacture from synthesized organic and inorganic compounds. The majority of small molecule treatments currently on the market are manufactured through chemical synthesis. Having usually just one molecule not only makes the whole process easier when compared to biologics manufacturing but also cheaper. However, the financial gain from a patented drug can be quite high. For example, Viatris’ atorvastatin sold under the brand name Lipitor made an estimated nine billion dollars per year in revenue for the parent company Pfizer during its patent life and still makes a bit under two billion dollars yearly even now that it’s facing competition.

For biologics, the manufacturing process begins with therapeutic design and development and then goes through laboratory evaluation, process development & manufacturing for GLP Pre-Clinical Studies, manufacturing of a clinical trial product and its clinical evaluation, and finally, commercial adoption. Although this process is quite complex and challenging, it gives the pharmaceutical companies more security than a small molecule drug since replicating the exact biologic drug and recreating the whole process is quite difficult. This means that the drug will be profitable even after its patent life. Unlike small molecule drugs, biologics are made using genetically modified organisms like bacteria or yeast. Biologics manufacturing seems to be quite lucrative. Just in 2019 for example, seven of the ten top global bestselling drugs were biologics, including AbbVie’s Humira, which generated over 19 billion at that time.

Patenting strategies – Pharmaceutical companies invest a bigger part of their budgets into research and development compared to other types of companies such as tech entities. For 2021, they spent an average of roughly 20% of their revenue on R&D and this percentage has been even greater in the past. As a lot of money is involved in research and development and many companies are also already investing to compete with one another, patenting and its timing become essential in the drug’s financial success.

When it comes to pharmaceuticals, companies follow many different patenting strategies but they share some essential common elements that differentiate them from other kinds of companies involved in patenting. For technology companies, although the timing is quite important, it is rare that another rival company is studying the same problem and beats them by patenting the solution first as there are so many possibilities in tech.

In contrast, for pharmaceutical companies, the diseases that they are trying to cure/prevent are relatively finite and the possibility of another rival company studying a certain condition and patenting a similar solution to your drug is high. This is why while researching, it’s essential to identify early the successful candidates for a drug and patent them as soon as possible. The issue here is that the patents are filed well ahead before an approvable drug gets developed and there are many cases when a product makes it to market while a significant amount of its patent life has expired. One of the major challenges in this direction is that some very promising treatments get abandoned right in the research phase due to the prolonged time they might need to develop. Without patent protection, the costs of R&D cannot be justified.

Looking at the small molecule versus biosimilar patenting strategy, identifying the potential drug treatments early and filing the patents early is the best approach. This will protect against rival companies conducting research in your area. From this point on, you can continue your international filing strategy in the countries that are already targeted by the marketing team. What makes early filing even more critical is the fact that the chemical space is currently crowded with small molecule drugs. This also might be seen as a reason why biologics drugs are becoming more popular.

Timing is equally important for the small molecule drugs, but since developing the actual product and getting FDA approval can take some time, then other options such as trade secrets are considered in order to delay the patent life. Small molecule drugs are regulated by the Center for Drug Evaluation and Research (CDER) and new drugs must go through a New Drug Application (NDA) for approval. The FDA-approved small molecule drugs get three to five years of exclusivity. Meanwhile, biologics are regulated by the Center for Biologics Evaluation and Research (CBER). They go through a Biologics Licensing Application (BLA) before being approved for marketing. BLA shares some similarities with the NDA yet it focuses more on the manufacturing process due to the complexity of biologics. The FDA gives at least 12 years of exclusivity for a biologic drug. As for the clinical trials, the FDA makes no distinction between the drugs.

Biosimilars are what generic drugs are to small molecule brand drugs. Similar to the Hatch-Waxman amendments that introduced the concept of generic drugs, the Biologics Price Competition and Innovation Act (BPCIA) of 2009 introduced biosimilars. With this move, Congress intended to increase access and affordability to biologics for consumers. To get a biosimilar approved, you must show to FDA that the biologic is “safe, pure, and potent,” and that the production process will ensure the same results as the original biologic drug. The BCPIA has also introduced a process for biosimilar and biologics manufacturers to resolve their patent disputes.