Earlier in March, we released our third annual ITC Intelligence 2022 Report that covered all of the ITC Section 337 Investigations filed from January 1, 2016, through December 31, 2021. Similar to previous years, we provided an overview of ITC investigations and covered high-level statistics including rankings of attorneys, law firms, companies and judges. We have already published the most active companies in ITC investigations in Patexia 132. This week our focus will be on some of the very best law firms based on their activity and performance rankings as we measured for the period of our study.

The following chart shows the ITC Section 337 filings over the last several years. The upward trend started since 2019 and in 2021 there was a total of 71 Section 337 investigations. 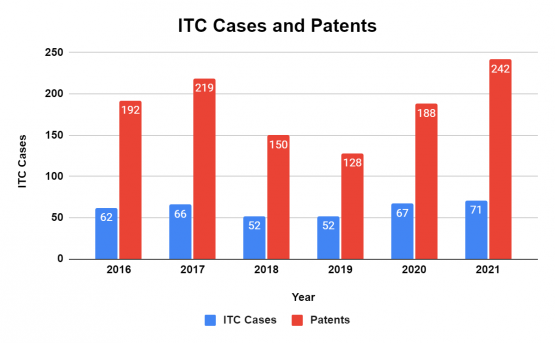 The following table cover a list of some of the best ITC firms ranked in the top 100 by performance or activity for representing respondents, complainants or overall. Being in the top 100 out of 367 firms, places the firm in the top 25 percentile. Here is the list in no particular order:

We continued to update and improve our methodology from prior years using many valuable suggestions from the IP community. When it comes to Activity Score and the ranking, we considered only ITC violation investigations. We simply counted the total number of cases for an attorney, company or a law firm to obtain their rankings. However, more recent activity was given a slightly higher point. For example, for 2022 activity ranking, a firm with five ITC investigations in 2016 was ranked lower than another firm with five investigations in 2021. As a result, using a weighted function, we slightly discounted the older cases when we calculated the activity score.

For success scores we evaluated the outcome for all the terminated ITC cases and used the following table to allocate points to different stakeholders. We considered the outcomes as they may vary for different respondents within the same investigation.

The final performance score was a weighted function of succes and activity scores. This year we gave activity slightly higher weight based on the feedback we received from law firms and companies.

In the following weeks, we will continue to cover some of the best performing and most active attorneys in ITC as well as analyze more high level statistics from our recently published Patent Prosecution Report. Stay tuned!