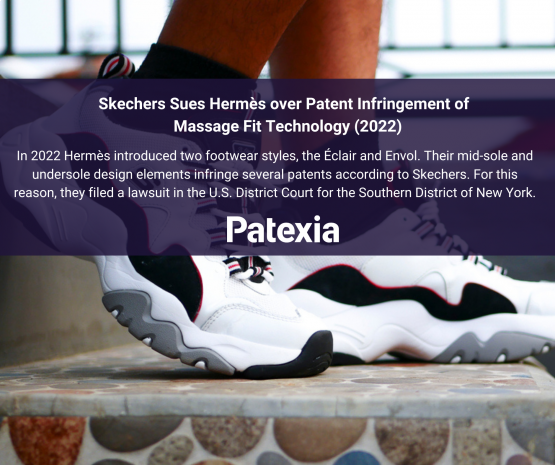 On Oct., 18th, 2022, Skechers announced in a press release that they filed a lawsuit in the United States District Court for the Southern District of New York in Manhattan. A Skechers spokesperson stated: “Skechers invests tremendous resources into research and development to introduce fresh, unique, and exciting footwear technology to its customers year in and year out. It is disappointing that a company of Hermès’ reputation and standing has chosen to copy and infringe Skechers’ patented designs. While Skechers always prefers to compete in the marketplace rather than the courtroom, the Company has no choice but to seek legal recourse when competitors blatantly tread on our rights.”

The dispute between the sneaker-maker and the French luxury brand arose when Hermes introduced two sneaker models, Eclair and Envol, in 2022. In the lawsuit, Skechers has included two patents issued by USPTO, D965,263 and D925,183, that cover shoe midsole and outsole designs. According to them, both Hermes models infringe these patents in violation of 35 U.S.C. Skechers maintains that the defendants are causing them lost profits due to this infringement. Accordingly, they request an unspecified amount in damages as well as an order to enjoin Hermes from further infringing their patents.

This is not the first time that Skechers has filed lawsuits against competitors for infringing the patents related to their sneakers. In the past, Fila, Reebok, Steve Madden, and other shoe brands have been sued for infringing the design patents that cover the successful "Go Walk" sneakers. However, these disputes have mostly ended in settlements.

How do you think this case will further develop? Is Hermes infringing the design patents?

For Skechers: Andrew Ligotti and Robert Lee of Alston & Bird