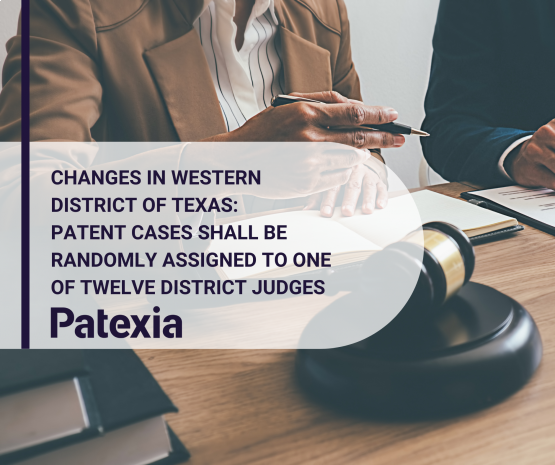 Earlier this year in February, Patexia released its second annual Patent Litigation Intelligence Report covering a 4-year period from July 1, 2017, through June 30, 2021. Besides offering the evaluation and rankings by activity and performance of all stakeholders in patent litigation, this report also provided several insights into the current landscape. One of the significant changes in recent years was the imbalance in case filings between districts, especially the growth of the Western Texas District Court. This district saw just 73 patent litigation cases in 2017 but skyrocketed to 981 in 2021 – over 13 times. As analyzed in Patexia 123, this was mainly attributed to Judge Alan D. Albright’s efforts after he assumed office in September 2018.

What attracted the plaintiffs? This judge’s quick schedule and deadlines were very attractive, especially to plaintiffs seeking a quick conclusion. Judge Albright actively advertised his district court, and these benefits and his efforts seem to have been quite successful. Since he took office, the number of cases filed in his district has been increasing at unprecedented levels. Practically, the majority of cases filed, go to him in the Waco Division. Up until now, it was quite easy to file a lawsuit in Western Texas District Court and be absolutely certain that the case would go to Judge Albright. All you had to do was select “Waco” from the drop-down menu on the court’s electronic filing system and the case would automatically be assigned to Judge Albright.

All of this traffic in patent litigation going to just one judge has received criticism, especially from the United States Senate Judiciary Committee and Federal Circuit with several rulings. In November 2021, a bipartisan pair of U.S. senators complained about Judge Albright misusing his power in order to make his district the most active. According to them, 25% of all cases of patent litigation filed in the USA are pending before Albright. The senators criticized the fact that he openly urges patent owners to file cases in his district, noting also at least 15 cases of case transfer denials. All of this has attracted non-practicing entities in the Waco Division, with individuals and companies generating revenue by suing over patents instead of making actual products. In the letter to the Honorable Chief Justice John Roberts, the senators request a report of potential issues that this situation might have enabled and a solution.

Just the week before, the Chief Judge of the U.S. District Court for the Western District of Texas ordered all civil cases filed in Waco, including patents, to be randomly assigned to the 12 district court judges, including Judge Albright. Now there is only an 8% chance that a case filed in Waco will be brought before Albright. So, many cases will now be heard before other judges in Austin, San Antonio, El Paso, and other divisions. This move appears to answer the criticism and the letter from the U.S. senators, providing a sustainable solution to the problem.

The effect of this order remains to be seen. First of all, defendants that are already in court with cases before July 25 won’t be affected. For the new cases, the other judges may or may not hold the cases that are assigned automatically to them, and based on a court amended order, they can reassign these cases to other judges by mutual consent. The reaction of plaintiffs to this decision is also interesting. There are several other hotspots for patent litigation such as the District of Delaware, or the Eastern District of Texas, so this might bring more cases filed in these districts. It is believed that the main reasons why plaintiffs favor Judge Albright will now become the reason that will shift the filing activity, at least partially toward other districts. However, on the other side, many major law firms have already responded to the increase of filings in the Western District of Texas and have already established their new offices there. This makes this district still attractive due to their presence.

What do you think the filing trend would be in the coming years?