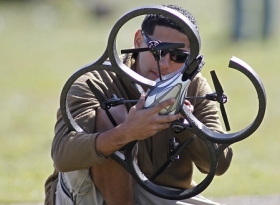 Armed with a 1.8 gigapixel camera rig, A U.S. Army Hummingbird copters over Afghanistan looking for suspicious insurgent activity. On board, a robo cameraman called ARGUS pulls focus on 36 square miles and shoots six petabytes of video – all in a day’s work. Somewhere in that ocean of media, a military spy mission is accomplished. Somewhere on the ground, a bleary-eyed analyst stares at six petabytes of what the military calls Death TV. It’s not a wrap. And there will be a mountain more tomorrow, generated by other drones, blimps, spy planes and covert cameras patrolling the Afghan countryside, looking for the perfect shot. Air Force, Army – and even Homeland Security – now boast Hollywood technology, but can’t scale qualified personnel fast enough to view, process and communicate the montage of surveillance footage piling up in the name of freedom.

The U.S. Military has a big data problem. And DARPA, the neo-Frankenstein brains behind national security, has been trying to fix it through the Mind’s Eye, a brainy collective tasked to develop machine-based visual intelligence. And, as part of President Obama’s “Big Data Initiative,” DARPA has a new project called XDATA in March, a DoD related program focused on developing computational techniques and software tools for processing and analyzing large volumes of mission-oriented data collected by federal agencies. If they can build a flying humvee, maybe DARPA has enough imagination to transform big data into a strategic differentiator.

In 2011, DARPA funded a deft mix of university labs and private companies to engineer “smart cameras” designed to report only critical activities in the field, increasing and accelerating the relevancy of incoming data for military purposes. As part of the Mind’s Eye program, these teams have been developing a software subsystem integrating computer vision and AI.

Carnegie Mellon, MIT and UC Berkeley were some of the academics chosen by DARPA to boost key components of the Mind’s Eye initiative: visual event learning, new spatiotemporal representations, visual inspection and grounding of visual concepts.

But Mind’s Eye, like XDATA, is really about algorithms. James Donlon, Mind’s Eye program manager, asked his researchers for breakthrough algorithms that automate the recognition and description of human activities, real movement. Things like bad guys digging holes or moving a cache of weapons. Donlon challenged algorithm developers with a real-world data set of over 7,000 videos meant to take researchers out of their comfort zone - nothing artificial, and nothing too academic.

DARPA may find itself behind Google and Walmart when digesting huge data sets, but have pushed the boundaries of visual intelligence, even if Mind’s Eye runs dry and a working prototype never sees battle.

Before Mind’s Eye, pioneers in the field of visual intelligence had put small dents in the problem, but danced around a solution. DARPA’s bold endeavors – short-term research and development projects driven by a $2.8 billion budget - require bold thinking. In this case, bold gets mixed with a sense of urgency. Because true visual intelligence could quickly penetrate the Air Force, law enforcement, private security and anybody else seeking Minority Report surveillance and big data liberation.

The U.S. intelligence community has procured an armory of technical solutions for locating enemy 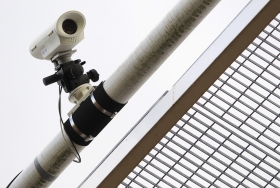 supply chains, rogue rebels and booby traps. But the Army’s ARGUS or the Air Force’s Gorgon Stare, equipped with multi-angle zoom and full-motion sensors, deliver a tsunami of video that requires thousands of human eyes to dissect. This conundrum, in many cases, has defeated the purpose of having real-time surveillance handy for instant intel. Military leaders from all branches don’t want to keep throwing warm bodies at the problem. There isn’t time. And sitting slack-jawed for hours like a deer hunter waiting for something to move is a waste of manpower. When it comes to spy video, they want quality not quantity. They also want cameras that see and think like humans so foot soldiers are spoon-fed precise targets.

Dumber technologies built on visual intelligence algorithms have been successful in reading license plates and finding guilty faces – sometimes in brilliant color. But, according to the military, valuable visual intelligence starts with eliminating the middleman. Humans can’t keep up, and that’s what’s made Mind’s Eye different. Yes, imagery analysts may eventually be out of a job. But the far-reaching effects of the smart camera Donlon is proposing are undeniable. That’s why private companies watch DARPA projects with angel eyes, waiting for transforming technologies to slip into first-mover applications. Visual intelligence free of human intervention has crossover appeal for borders, airports, automobiles and drug wars.

What about big data in the corporate world? Part of that challenge is sifting through piles of disparate data to find nuggets of information that marketers and management can spin into actionable items. Mind’s Eye theory is the same, only DARPA wants to take an AI robot and kill a war-related problem directly at the source. That’s the Pentagon’s version of business intelligence. However, on the XDATA side DARPA should look to industry for viable models of analytic innovation. Enterprise invested in big data for profit, not security.

However, the American Civil Liberties Union and many concerned Americans are questioning the constitutionality of privacy precedents – like drones, NSA data centers and full-body scanners – and may perceive robotic intelligence as a serious Orwellian threat. And while no ARGUS-enriched Hummingbirds have been spotted near Miami, there have been drones. Military-bred technologies do tend to creep into law enforcement and curious cops willing to lobby the FAA are using drones for localized surveillance. Fast forward visual intelligence and assumed efficiencies in both hardware and software and you have an AI big brother not only watching you, but also raising red flags over a much larger data set. Suddenly, appearing somewhere on Death TV and getting lost in petabytes of data sounds less risky, less intrusive.