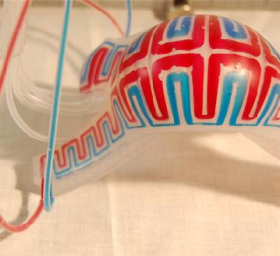 DARPA, responsible for advanced research for the DoD, recently engaged a team of Harvard-led researchers to explore the feasibility of creating “soft” chameleon robots that utilize microfluidic channels. These robots, composed of silicone-based materials, are being developed through grants issued by DARPA under their Maximum Mobility and Manipulation (M3) program. According to DARPA program manager Gill Pratt, “DARPA is developing a suite of robots that draw inspiration from the ingenuity and efficiency of nature.”

Because of the unique nature of this request, the academics involved are not specialists in computer science, ergonomics, human-computer-interaction or even industrial engineering. They are associated with Harvard University’s Department of Chemistry and Chemical Biology, and the Wyss Institute for Biologically Inspired Engineering.

The chameleon robot borrows heavily from capabilities that exist within nature including marine animals like the octopus and cuttlefish. The soft robot, which has a stretchy body, is internally lined with a series of small channels which can be filled with different colored dyes, giving it the ability to be inconspicuous in a variety of environments. However, unlike their real world inspiration, these new robots can change their contrast, colors, temperature and brightness based on the needed parameters of the mission at hand. The video below shows it fill up with colored fluids and "disappear" in 30 seconds.

Not surprisingly, these tasks include signaling and covert surveillance. Interestingly, and while not directly discussed, these robots can be used to deliver biological and chemical weapons while avoiding detection systems that target metals and heat. Finally, these systems are pneumatically powered, which means that pressurized air drives their motion so they can operate in a variety of harsh physical environments without experiencing system failure or power loss.

Pratt goes onto say, “For defense applications, ingenuity and efficiency are not enough -- robotic systems must also be cost effective. This novel robot is a significant advance toward achieving all three goals.” The rubber robot, which looks nothing like the sleek hardware robots portrayed in contemporary science fiction, is approximately the size of a deck of cards and may eventually be manufactured for less than $100 a unit.

In addition to using inexpensive materials for production, the manufacturing process is streamlined, which also leads to considerable savings, by using low-cost molds. These savings, if actually obtained, would remove one of the last barriers to entry for the widespread use of robotics into the US military market -- cost. Outside of military and surveillance needs the researchers also believe such robots will lead to advancements in medical training and possibly prosthetics.

Of course, as with any new technology -- or reapplication of old technology -- there are potential pitfalls and consequences for decisions that are made as part of the design process. The robot, when loaded with fluids, can only cover approximately 40 meters per hour.  Should the robot be used without carrying a load of coloring liquid, it can move at approximately 67 meters per hour. This is not very fast but DARPA, aware of these issues, is willing to trade speed for having the ability to work in very small and enclosed spaces.

Robotics, military and otherwise, in its existing form tends to focus on creating prototypes and proofs of concept that were inspired by contemporary science fiction as represented in books, graphic novels, movies and video games. Unfortunately, this creates a hardware focused industry in which the associated cost of developing robots is very high. Regardless, the problem with such systems is that, while they look great on the big screen, they are often extremely expensive, over-engineered and limited in their use. The solution, it seems, at least in this case, is a bit more organic and takes into consideration that over millions of years, evolution has revised many specifics to answer the questions and challenges that we as a species must contend with in order to survive.