This week, the Patexia Data Science Team analyzed the recent patent litigation data obtained from PACER (Public Access to Court Electronic Records) to understand any trends and identify any anomalies in the data.

Although many have suggested that patent litigation has been declining, the recent PACER numbers show that litigation rose 31% in Q2 of 2016 compared to Q1. In the second quarter, 1,403 cases were filed compared to 1,067 in the first quarter. Additionally, further investigation suggests that the lower numbers in the first quarter might have been temporary and due to other reasons. 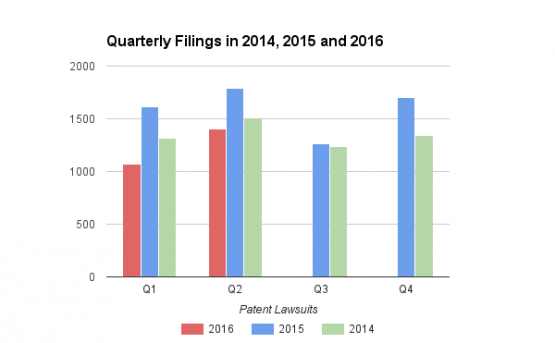 Looking at lawsuits filed since 2009, we see the number has been rising every year except 2014. Admittedly, this increase is magnified somewhat by the joinder rules under the America Invents Act (AIA) which became effective in September 2011 and limited the number of defendants a plaintiff could sue in a single case. 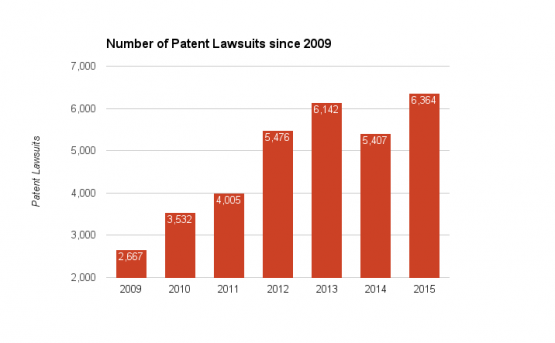 While there might be various reasons and some experts have cited the Alice case or the Patent Trial and Appeal Board (PTAB) as obvious reasons for the decline, further investigation of data in Q4 suggests another hypothesis for the sudden drop in Q1.

As it is shown in the following chart, in November of 2015, the filing rate was more than twice the average twelve trailing months (ttm). The average  is currently 453 per month (ttm). In fact, 283 cases were filed just on a single day, November 30th, 2015. For the three-month period after that (December, January and February) the average dropped to 315 cases per month. 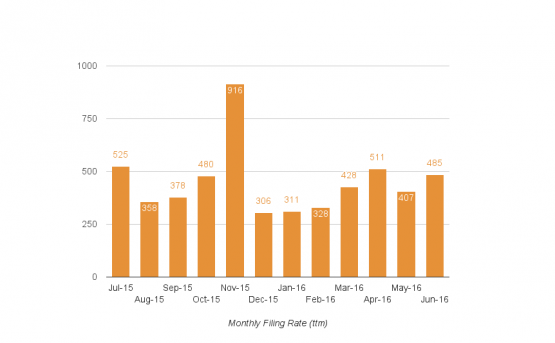 The large jump before December 1st, most likely occurred because of the US Supreme Court Decision to adopt a proposal submitted by the Federal Rules Advisory Committee to basically abolish Form 18 for patent infringement filings. This decision which went into effect on December 1st, basically raised the filing standard for plaintiffs.  In other words, plaintiffs needed to identify the claims being infringed and the products being accused of infringement. Our hypothesis is that plaintiffs obviously were aware of this new requirement going into effect on December 1st and filed all the cases they were planning to file in the following months in anticipation of this change explaining the jump at the end of November and the sudden drop in the following three months. If we assume this was the main reason for the anomaly in November’s filings, it means that the actual number of cases in 2015 should have been slightly lower and Q1 of 2016 should have been in fact higher.

While this analysis suggests that the number of cases  may be back to the same levels as the prior two years, it definitely does not show any sign of significant year over year growth. It is also worth pointing out that all these recent changes such as new filing requirements or IPR are changing the landscape in such a way that cases now brought forward by unsophisticated plaintiffs with no sound merits or based on low quality patents will either be settled for low amounts or dismissed quickly. As both plaintiffs and defendants become more sophisticated, even if the number of cases remains at these levels or drops slightly, the importance of cases will be much higher. In the following weeks, we will look into PTAB and IPR to investigate whether they have been the Patent Death Squads as some experts say.

Please feel free to suggest new topics for the future in the comment section.