First quarter of 2019 is behind us and patent litigation continues its downward trend, which was started back in 2015. In the first quarter of 2019, total of 825 patent cases were filed in different district courts. The number is down 12 percent compared to the same period last year (Q1 of 2018) and also six percent lower than the previous quarter (Q4 of 2018). For the same period, 323 IPR petitions were filed, which was down 14 percent compared to Q1 of 2018 and almost 27 percent lower than the previous quarter (Q4 of 2018). 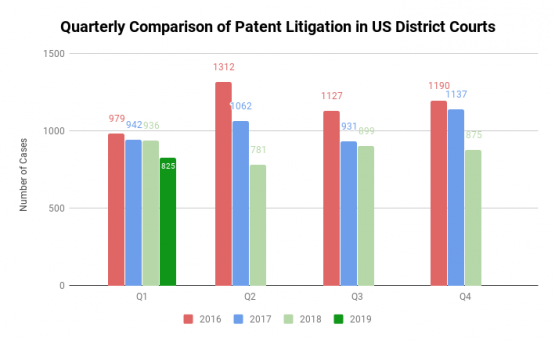 As we had covered this numerous times in our previous Patexia Insight articles, several factors including Alice Case, IPR and limitation on venue shopping for patent litigation (TC Heartland LLC v. Kraft Foods Group Brands LLC) had contributed to this drop and have significantly changed the landscape for patent litigation in the US. This has caused many patent owners to look for new venues to monetize their patent assets or file their cases.

Recent studies suggest that patent cases, especially those brought in by Non-Practicing Entities (NPEs) have been rising in Europe and particularly in Germany due to its independent court system for invalidity and infringement as well as possibility of injunction grants before completion of the invalidity action.

IPR filings follow the district court trends (behind by about a year). The following chart shows the similar quarterly drops for IPR as well. 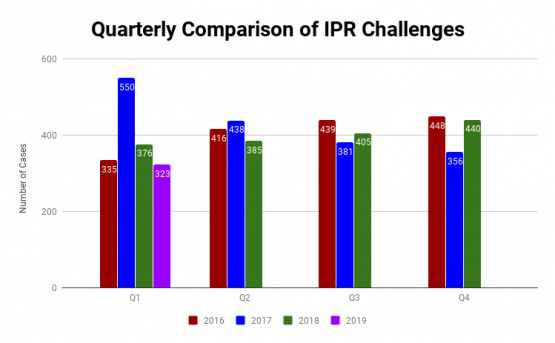 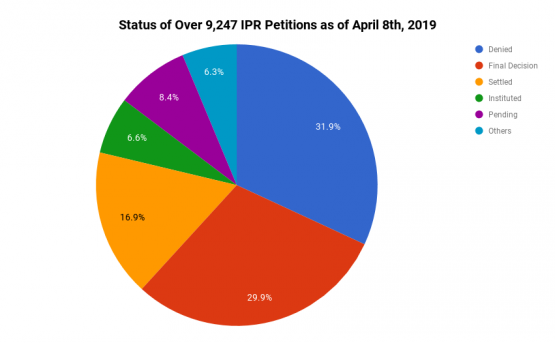 We have provided rankings for the top law firms representing petitioners and patent owners in our latest IPR Intelligence Report in September 2018. We have analyzed the performance of more than 1,100  law firms, 3,000 companies and 5,000 IPR attorneys.

IPR still remains quite popular and has become an integral part of defense strategy for defendants in patent cases. We've seen many companies struggle to find the right counsel for their IP litigation needs. Law firms and attorneys also have the challenge of distinguishing themselves in the rapidly growing IPR space. Our goal is to enable our community of IP professionals to make better decisions based on proven records.

In terms of popular venues for patent litigation, PTAB is still the number one venue overall, but when it comes to district courts, there have been major changes. Delaware has moved to number one (1) with 236 cases in Q1 of 2019. Texas Eastern which was once the most popular venue is now about the same as California Northern with about 88 cases. 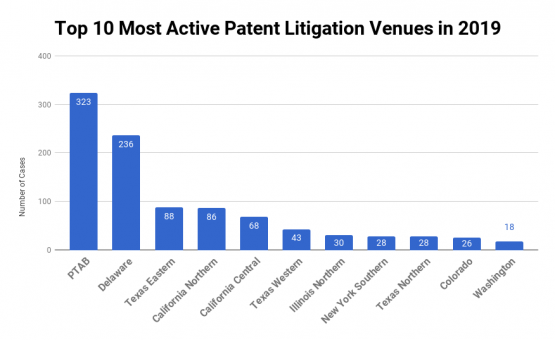 While the patent market remains under pressure, in recent months, our patent due diligence team has received more new orders from our clients looking for evaluation of patent portfolios for acquisition or licensing. We believe some of the NPEs are taking advantage of the current distressed patent market and are buying patent assets at a discount in preparation for new monetization / licensing campaigns.

Recently we have been working on modeling the IP expenses for a number of companies so we can estimate the cost of attorney fees for patent prosecution and litigation. This has enabled us to model the IP expenses for companies, compare the IP department costs between different competitors and at the same time estimate the IP revenue for law firms. In the coming weeks, we plan to release a study about Apple patent prosecution expenses, which includes USPTO fees, attorney fees and maintenance fees in the US. Stay tuned...