The first quarter of 2021 just ended but several recent trials in Waco, Texas including the famous VLSI Technology vs. Intel, which resulted in a $2.18B verdict, garnered all the attention of the patent community.

Patent litigation continues to grow as both volume of cases and damages awarded are rising. The pandemic seems to have had little or no impact at all on this trend which began in late 2019 (Patexia Insight 74).

This week, the VLSI Technology and Intel are back in Waco, Texas for the second trial with a new set of patents before Judge Alan Albright. The first trial resulted in a $2.2B verdict against Intel and favored VLSI Technology, which made it the 2nd biggest patent award of all time. The battle was between Morgan Chu of Irell & Manella LLP and Bill Lee of WilmerHale over two patents related to processor power and memory voltage efficiency, issued to SigmaTel and Freescale but later owned by NXP Semiconductor after its acquisition of Freescale. The patents were later assigned to VLSI Technology for the purpose of litigation (funded by Fortress).

In the first quarter, other than a number of high profile cases, a total of 1,013 District Court Patent cases were filed (excluding ANDA cases), which was 24 percent higher, compared to the 817 cases filed in Q1 of 2020. This number was five percent higher than the previous quarter (Q4 of 2020).

ITC Section 337 saw a whopping 42 percent increase in Q1 compared to the same period last year (17 vs. 12 investigations). During the same quarter, the number of IPR petitions moderately declined to 304, which is four percent lower than 317 petitions filed in Q1 of 2020. This may partially be due to the popularity of the re-examination process and the uncertainty of discretionary denials for IPR.

Noticing the rise in popularity in ITC cases reported in Patexia Insight 102, this quarter reciprocated similar findings with a 41 percent increase in Q1 of 2021 compared to Q1 of 2020.

So far, in 2021 ANDA cases have shown a 15 percent decline compared to the previous quarter. Similarly, Federal Circuit cases (CAFC) saw a decline in case count compared to prior quarters. Although the USPTO originated CAFC cases are quite popular and have taken a bigger percentage of the total number of cases. Patexia is planning to release its first CAFC Intelligence Report later this year.

The following table summarizes the quarterly patent litigation filings of District, IPR, ANDA, Federal Circuit, and ITC cases from the first quarter of 2020 to 2021. 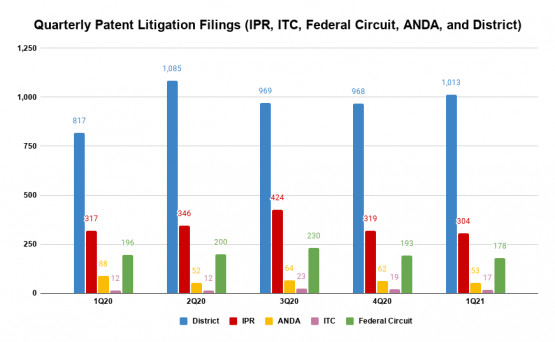 Likewise, the Delaware District Court (dedce) also shows around a 40% increase with 242 cases compared to the 175 cases in 2020. 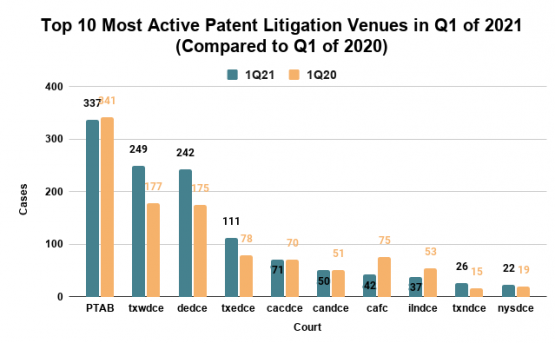 Moving on to patents, as illustrated in the bar chart below, for the last eight quarters, the number of issued patents have been hovering between 90K to 100K per quarter with one exception for Q4 of 2019. In Q1 of 2021, a total of 93,690 US patents issued, which was 5.5 percent lower than the previous quarter and two percent lower than the first quarter of 2020. This confirms what we had predicted in Patexia Insight 79. Last year, we estimated that filing activity would see a decline of 2 to 4 percent due to COVID-19 and general slowdown. 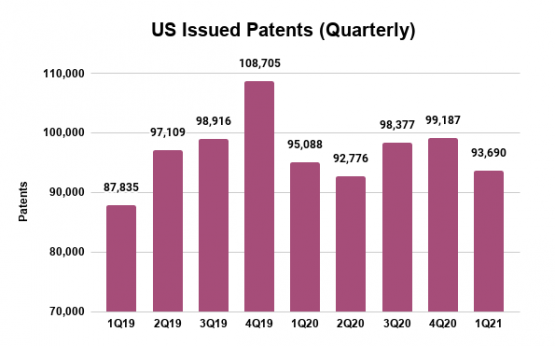 Highlights of the First Quarter

In the following weeks, we plan to cover some of the best firms for patent litigation and ITC Section 337 investigations as reported in our recently published IP Intelligence Reports. We will also expand our coverage of CAFC cases as we prepare to publish our first CAFC Intelligence Report.