Search
Pedram SameniAug 7, 2019Legal
Patexia Insight 66: Which Firms Are Falling Behind in IPR?

The first Inter-Partes Review (IPR) was filed about seven years ago on September 16, 2012. A few firms were quick in leading the way and grabbing market share as IPR market was forming in the early days.

At the same time, some of the top litigation firms, such as Weil Gotshal or Quinn Emanuel, did not pay much attention to IPR. And in some cases, they farmed out their IPR work to other firms. Among their concerns were lower profitability and smaller case size as compared with district court cases.

Now, with an estimated market size of $600 million to $800 million per year, law firms strongly compete to gain market share. In this competitive market, some of the early winners may have fallen behind. This week, we are analyzing the five firms with the largest drop in IPR activity from 2014 to 2018, attempting to understand the reasons behind the fall.

The number of IPR filings grew by 7 percent from 2014 to 2018. In 2014, a total of 1,501 IPR petitions were filed as compared with 1,607 in 2018. Despite the growth in the total numbers, some firms seem to have lost significant market share from 2014 to 2018. The following chart shows the five firms with the largest drop in the number of IPR cases in those two years. 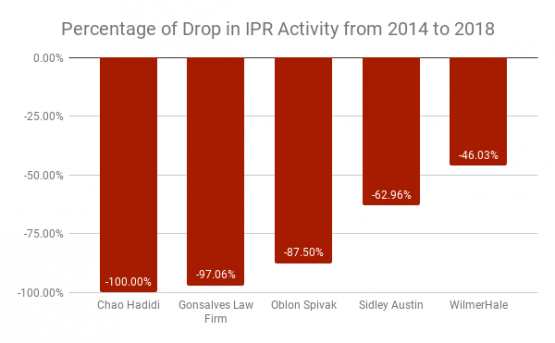 Because every case, every client and every firm has a unique story, it is not as simple as looking at this chart and drawing a conclusion. So we are going to investigate further, searching for the reasons behind the decline in the IPR work for each of the above firms, while at the same time, coming up with some common reasons for declines in general.

The following chart further shows the annual activity of these firms (number of IPR cases) from 2014 to 2018. As we analyze the numbers for each of these firms, we can develop some theories. 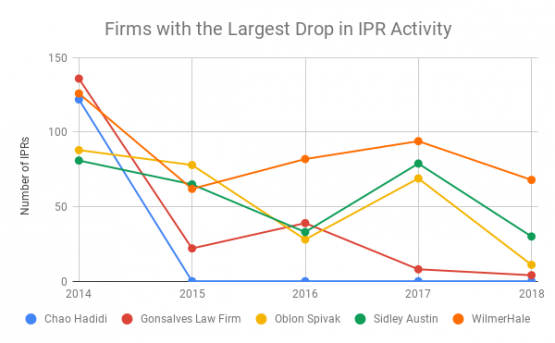 What could be the reasons for revenue (IPR Activity) decline?

1.  One-time client - While most of the larger companies, such as Microsoft, Apple or Sony, could be a source of repeat business for a law firm, the majority of mid-size or small companies tend to be one-time clients. This seems to be the case for Chao Hadidi and Gonsalves law firms.

After analyzing their cases and clients, we observed that the 122 cases of Chao Hadidi and 136 cases of Gonsalves firms in 2014 were related to the infamous Zond litigation (i.e., Zond against a number of semiconductor companies), which we extensively covered in Patexia Insight 31. Both firms represented the patent owner, Zond, in all those matters. Zond, as a small firm, was the key (and only) client of those firms. So after those cases were ended, these firms have not been able to obtain clients with large number of cases to keep the same volume of work.

WilmerHale seems to have a healthy load of IPR work from different companies. But similar to the two other firms already discussed, among its clients, WilmerHale had a one-time client back in 2014 that significantly contributed to the volume of its IPR cases in 2014 (i.e., Gillette).

Intel seems to be the number one client of the firm when it comes to IPR. Back in 2014, the firm represented the petitioners led by Intel against Zond. Among them was Gillette (Proctor and Gamble) with 35 IPR cases against Zond, which increased its total number of cases just for that year. Otherwise, the firm seems to have a more diverse set of clients at this point, which makes its PTAB practice very robust and stable.

2.  Loss of the key IPR talents - Analyzing the Oblon Spivak IPR work showed us a different challenge that some firms may face. Based on some measures, the firm is one of the most active patent prosecution firms, mostly known for filing foreign applications and specifically working with large Japanese clients, such as Toshiba, Ricoh, Sony, Mitsubishi and Toyota.

Because of the familiarity of the firm with the patent office practices, the firm was very quick in gaining momentum and establishing itself as one of the top players for PTAB and IPR work early on.

However, the firm lost its top IPR talents over the last few years, which impacted its workload in the following years. Scott McKewon, a partner of the firm and one of the most active IPR attorneys based on Patexia Insight Reports, joined the prominent firm, Ropes & Grey, as its chair of PTAB practice in August of 2017. Greg Gardella, another partner and a top IPR attorney, also left the firm, together with Natalie Grace, in January 2017 to form their firm, Gardella Grace LLP. And finally, another partner with substantial IPR background, Michael Kiklis, also left last July to join Bass Berry and Sims.

3.  Loss of a major client - In some cases, the workload or revenue could be impacted if it substantially depends on a few key clients.

For example, Sidley Austin used to work closely with Apple. Back in 2014 and 2015, the firm represented Apple in 44 and 38 IPR cases, respectively. However, that number significantly went down in the following years, although it seems as though the number is gradually recovering. In the first half of 2019, Sidley has represented Apple in 9 IPR cases.

The firm has also gained more business from other top clients recently, such as Microsoft and SK Hynix, which helped offset some of the decline from Apple (e.g., the firm represented SK Hynix in 16 IPR cases in 2017).

As you see, there may be various reasons behind any drop in activity, such as a loss of a key client to the loss of a talent to, in some cases, an unusual rise due to business gained from a one-time client. Declines should not always be interpreted as negative.

Which firms are the best performers in IPR?

Over the past 7 years, the top players have changed a lot. While some may have left the field, many new entrants are rising to the top.

Similar to the last couple of years, Patexia Data Science team is in the process of analyzing and nominating the best firms of 2019 for IPR. We have already contacted the active firms and asked them to verify their numbers for the last five years (July 1, 2015, through June 30, 2019). We have received most of the feedback.

We plan to finalize the numbers in the coming weeks and publish the full report later this month. The report will cover general statistics about the IPR as well as claim-level analysis of the cases and rankings of companies, law firms and attorneys, based on activity and performance for three categories: Patent owners, petitioners and overall. Companies and law firms may pre-order the IPR Intelligence Report at a discounted price directly from our website.

IPR is still among the hot practice areas. Our recruiting team is working closely with several firms to help them fill their open IPR positions (partner-level positions). In the coming weeks, we plan to analyze the five firms with the highest growth in IPR work from 2014 to 2018. Stay tuned…

Disclaimer: The data for this study was obtained from public sources such as USPTO, PTAB, and PACER. Patexia has gone to great lengths to provide valid and accurate analysis based on this data. However, Patexia does not guarantee 100 percent accuracy nor take any responsibility for possible losses caused by the use of information provided in this study.