Search
Mikele BicolliAug 28, 2022Legal
Pfizer and BioNTech Strike Back to CureVac's Lawsuit by Seeking Declaratory Judgment of Noninfringement | Who Will Control mRNA Tech? 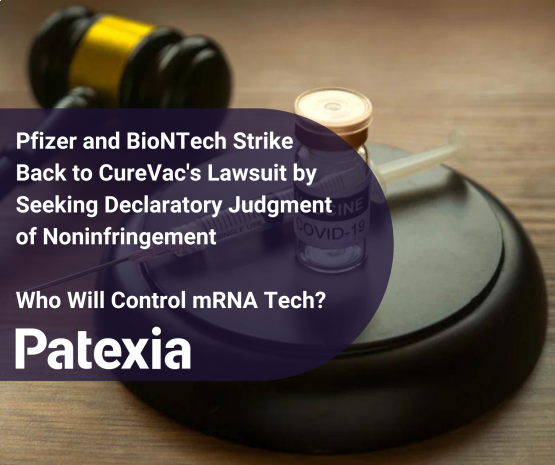 Two days ago, the companies that joined forces in order to develop the first Covid vaccine that got approval for emergency use by FDA, Pfizer and BioNTech received news of yet another lawsuit related to the mRNA technology used to develop the vaccine. Moderna, its direct competitor, which received the emergency use authorization from FDA just a week later as the second approved vaccine, is now suing Pfizer and BioNTech for infringing three of their patents and seeking damages for past and future sales of the vaccine. This is actually the second similar lawsuit they face over patent infringement of mRNA technology after CureVac filed a lawsuit in the German Regional Court in Düsseldorf in July. CureVac was involved in mRNA technology research for years and also participated in the vaccine “race” but they abandoned the vaccine as it was not as effective as the other ones made by Moderna and Pfizer-BioNTech.

The Covid vaccines developed by the groundbreaking mRNA technology are estimated to generate a combined revenue of $93 billion dollars with Pfizer reaching $54.5 billion in 2022 and $38.7 billion by Moderna. Potential damages and royalties that might come from these legal battles are surely enough of a reason to initiate litigation, even expensive ones like these as considered by the experts in the area. However, these seem to be just the tip of the iceberg when considering what experts say about mRNA technology and its future applications.

mRNA is basically a molecule that instructs human cells on how to produce proteins. By manipulating it, we can dictate our cells to produce basically every protein that exists, including harmless pieces of viruses that strengthen the immunity before we come in contact with the actual virus. Before 2020, few people knew about mRNA as mRNA vaccines had never been approved in any country. This is what made mRNA look like a sudden breakthrough coming at the right time during the pandemic. Overnight success stories take a long time, as Steve Jobs famously said, and this seems to have been the case with mRNA technology. Actually, research on mRNA began in the early 60s when it was discovered. However, it received a lot of attention lately due to its use in vaccines such as the ones for Covid by Moderna and Pfizer BioNTech. More than 50 years passed from discovery to the approval of the first mRNA vaccine application. Beyond the SARS-CoV-2 pandemic, experts have already established the next directions for mRNA tech. Better flu and influenza vaccines are already being looked into by Pfizer, while vaccines could combat HIV or tuberculosis. Used in conjunction with immunotherapy, mRNA may lead to promising treatments even against cancer. Many applications, such as these, might be not new, so the establishment of mRNA technology as a safe and effective method of treatment will unlock the mRNA potential quite quickly. This seems to be another reason why these lawsuits over the patents related to mRNA technology have been filed. Whoever controls these patents will be the go-to company for all other pharma companies that will require a license to produce treatments using mRNA tech.

At the moment, Pfizer and BioNTech are not sitting ducks for the CureVac lawsuit and claims, having already filed a suit on July 25, 2022, in the District of Massachusetts against CureVac AG seeking declaratory judgment of noninfringement of the patents mentioned by CureVac in its own patent infringement lawsuit in Germany. According to the complaint document, the plaintiffs claim that CureVac’s failed attempt to come up with their own vaccine is the motivation behind their lawsuit. It is stated that CureVac withdrew their vaccine candidate as the clinical trials showed it had an efficacy of about 47%. On the same day, the results of the clinical trials were published, the CureVac stocks fell by 50%, and by the end of 2021, it is claimed that they had an accumulated deficit of over $1 billion dollars. This lawsuit is perceived as a bold move by the plaintiffs, since if the court decides that they actually do infringe the mRNA patents, then they will be vulnerable to future patent infringement lawsuits. Meanwhile, a positive outcome of this lawsuit will surely put them in a much safer and better position to continue using mRNA technology and patents for various applications, including the Covid vaccines.