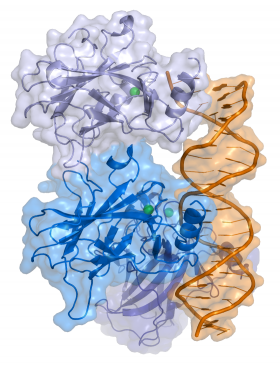 A tumor suppressor gene acts as a molecular guardian against cancer by protecting the cell from various forms of damage and oncogenic pre-events. The silencing of tumor suppressors, in concert with other forms of cellular damage, can lead to tumor growth and the progression of cancer. One of the most prominent tumor suppressors, first identified in 1979 at Memorial Sloan Kettering Cancer Center, is p53, coded in humans by the TP53 gene.

p53 functions as an anti-cancer gene in several ways, namely by initiating intracellular DNA repair when damage has occurred, slowing the cell division cycle (which is often deregulated in tumor growth) and initiating apoptosis (programmed cell death). Knockouts of p53 are devastating, almost always leading to cancer, while people born with only one fictional copy of p53 (a disorder called Li-Fraumeni syndrome) have a higher than average risk of developing various cancers.

p53 has been demonstrated to interact with more than dozens of other transcription factors, co-suppressors, kinases and even oncogenes. It has one of the most complex cell signaling pathways in the human body.

Earlier this week, researchers at the H. Lee Moffitt Cancer Center, led by the efforts of Dr. Jin Q. Cheng, reported the identification and characterization of PHF20, a novel transcription factor that regulates and maintains the stability of the aforementioned p53. Despite everything scientists have learned about p53 over the years, how p53 retains basal levels and becomes activated to repair DNA in damaged cells has been an unsolved question. Identifying PHF20 as a transcription factor was only the beginning of the team’s efforts; they wanted to further understand how it functioned and its effect on p53. 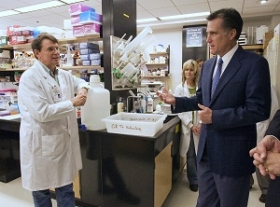 PHF20 was found not only to transcriptionally activate p53, but also to directly interact and stabilize with it. The researchers monitored the interaction with akt, a gene that interacts with PHF20 and phosphorylates it, thereby disrupting the PHF20-p53 interaction. Addition of akt had a direct correlation with the disruption of the interaction. Next, the researchers studied what would happen in the absence of PHF20. That is, would p53 activation also directly get reduced? So they created a knockout of PHF20, and found that p53 activation levels were also reduced in the absence of this critical gene. Dr. Cheng and his team published their results in the journals Nature Structural & Molecular Biology and The Journal of Biological Chemistry.

Dr. Cheng believes this discovery is significant because PHF20 “participates in simultaneous multiple interactions with other proteins and DNA” and serves to stabilize and induce p53. It is entirely possible that not only could PHF20 in and of itself act as a master tumor suppressor and be involved in human malignancy, but that there are other genes with which PHF20 interacts that could be candidate tumor suppressors, stabilizers of p53 and other key cell signaling pathways. All of these possibilities will be investigated by Cheng and his team as follow-up experiments to supplement the initial discovery.

Despite the wealth of advances made in genomics, molecular biology and, by proxy, cancer research, especially after the decoding of the human genome, identifying novel tumor suppressors remains far more challenging than oncogenes, mostly due to the fact that determining loss-of-function in cells is more difficult than evaluating acquired characteristics of transformed cells. Identification of new tumor suppressors, however, is very essential not only in unlocking key tumorigenic pathways, but also in providing potential drug targets for rational drug design. As such, the addition of PHF20 into the canon of known tumor suppressors is a significant advance in cancer research.