Search
Leyla RaianiJun 19, 2012Science and Technology
Should the U.S. Administration Pick a Winner in Alternative Energy? 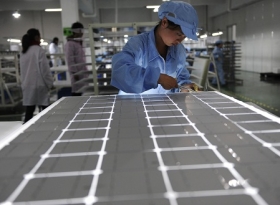 In recent years, China has emerged as the dominant player in green energy -- especially solar power. But despite rapid growth in recent years, solar power is more entrenched in European countries like Spain and Germany. They have promoted its development with strong incentives called feed-in tariffs that require electric utilities to buy solar power at a high, fixed price. The United States accounted for $1.6 billion of the world’s $29 billion market for solar panels. It accounted for at least half of the world’s production in 2010, and its market share is rising rapidly. But, while most U.S., Japanese and European companies still have the technological edge, China has a cost advantage. Analysts have said China has achieved this dominance through lavish government subsidies in its solar industry that are detrimental to American companies and other foreign competitors.

The U.S. Commerce Department recently ruled that Chinese manufacturers are guilty of dumping solar panels in the US market for less than it cost to make them. This was a violation of World Trade Organization rules that harmed American manufacturers. As a result, the Chinese manufacturers -- including Wuxi Suntech Power Co., Ltd. And Changzhou Trina Solar Energy Col, Ltd., among others -- will have to start paying a tariff of more than 31 percent when their products enter the US market. The issue has divided the U.S. solar industry, with manufacturers complaining that Chinese trade practices are driving prices down artificially and smothering U.S. production. Others in the industry say the complaint is counterproductive, given that most solar-related jobs in the U.S. are in fields like installation and sales that have benefited from cheap Chinese panels. U.S. manufacturer Solyndra became highest-profile victim of plunging panel prices last year, forced to file for bankruptcy despite receiving $535 million in federal loan guarantees. 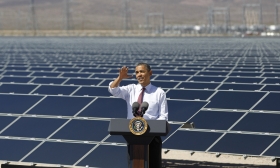 But is Solyndra the only reason for the panic? We need to be careful; disappointments like these must be kept in perspective. For every successful 19th-century coal operation, dozens, perhaps even hundreds of projects collapsed in bankruptcy. Looking at the solar industry, several companies have received the same loan guarantees as Solyndra, but they are not making news: rather, they are well-managed companies that are growing and quietly creating jobs across the country. Still, lobbying the wind and solar industries comes at a time when there is little enthusiasm for alternative-energy subsidies in Washington. Overall concerns about the deficit are making lawmakers more skeptical about any new tax breaks for business in general. Taxpayer losses of more than half a billion dollars on Solyndra, which defaulted on a substantial federal loan, have tarnished the image of renewable power in particular. Solyndra was financed under a now-expired program, part of the 2009 stimulus package, that provided government loan guarantees for clean-energy projects. In America, the federal government provides substantially larger subsidies to fossil fuels than to renewables. Over the full lifetime of subsidies, the oil and gas industry has benefited from tax expenditures of, on average, $4.86 billion per year between 1918 and 2009. The renewable industry has received an average of only $0.37 billion per year between 1994 and 2009.The largest subsidies to fossil fuels were written into the U.S. Tax Code as permanent provisions. President Obama has sought to end these breaks but has been overwhelmed by the opposition from industry and its congressional allies. Renewables aren’t governed by pricing volatility because their resources -- wind, sun and geothermal fuel -- are free. With the failure of solar energy manufacturer Solyndra and the loss of $535 million in taxpayer money that supported the company, Republicans and a few Democrats in the House of Representatives have attacked federal programs that support a transition to renewable energy.

China on the other hand claims that the U.S. urged them for years to embrace renewable energy as a way to reduce air pollution, combat climate change and limit the need for oil imports from politically volatile countries in the Middle East. As of 2011, about 3.1 GW of photovoltaic’s contribute towards power generation in China. Government offers subsidies of as much as 400 yuan ($63) per unit to buyers of energy-saving water heaters, refrigerators and washing machines. The plan uses “explicit fiscal subsidies” to promote use of such appliances, allowing consumers to claim those rebates directly from qualified sellers from June 1 this year to the end of May 2013, according to the statement posted on the ministry’s website, making renewable energy sources more competitive through the use of subsidies. For example, in Germany solar power has been growing considerably due to the country’s feed-in tariffs for renewable energy which were introduced by the German Renewable Energy Act. However, the subsidies available in Germany have not been limited to electricity produced by German-made solar panels, as politicians did not specify where the modules should come from. As a result, the German subsidy program has had an effect across the world, and primarily in Asia. Since solar panels have become much cheaper, they reason, buyers no longer need to be lured with subsidies.

Market intelligence company IHS said in press release that Chinese solar exports to U.S. could drop by about 50% this year. Opponents are afraid the tariffs will hamper solar’s ability to compete with fossil fuel power generation. Cost will go up because they are a key factor in getting businesses and homeowners to convert to solar power. U.S. government places tariffs not on foreign producers, but on U.S. consumers: the tariff raises the prices that Americans must pay. The Obama administration claims to support the adoption of solar power as a partial solution to the problem of climate change. After all, government policies are molded to support particular corporate interests, because big greedy companies exist in the clean energy sector too. One needs to understand that in practice, government policies are molded to support particular corporate interests. The big greedy companies despised by the typical environmentalist, exist in the “clean energy” sector as well. In terms of economic efficiency and maximizing the standard of living Americans, the federal government shouldn’t pick winners or losers in the energy sector.