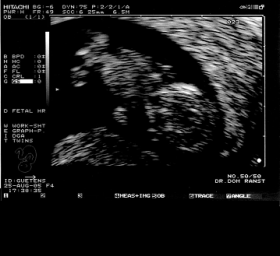 Around the world, 250,000 women die every year because of complications from pregnancy and childbirth, a leading cause of death and disability among women of reproductive age in developing countries.  To put it in more stark terms, every minute of the day, 365 days a year, a woman dies somewhere in the world due to a pregnancy. In addition to proper nutrition and vitamin intake during pregnancy to curb anemia, several global obstetrics groups urge women in countries with high maternal mortality rates to get an early ultrasound, preferably within the first 3-4 months of pregnancy.

Although diagnostic imaging is scarce in much of the developing world (mostly related to cost and portability), ultrasound imaging is a feasible technology for prototyping in low-resource settings such as developing countries.  Indeed, many notable technology giants, such as GE and Siemens, are working on low-cost portable ultrasound models. GE’s Vscan is a handheld, pocket-sized visualization tool that allows for non-invasive ultrasounds.  Mobisante, a startup in Seattle, takes portable ultrasound technology one step further with the MobiUS SP1 system, an ultrasound that wirelessly connects to the Internet or a smartphone for viewing results at an affordable price tag.  By comparison, the large, clunky ultrasound machine most people associate with hospitals can cost anywhere from $32,000-$160,000. 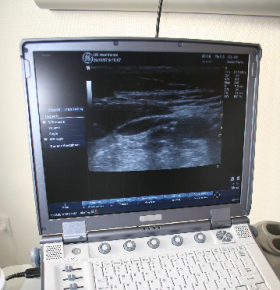 New research by a group of engineers out of Newcastle University in England is raising expectations that the development of mobile, handheld portable ultrasounds can be merged with new signaling technology to make them cheaper than ever.  Led by Jeff Neasham, who was inspired to start the research when his own wife became pregnant with their first child, the group has offered an ultra-cheap scanner model that costs less than £40 (or about $64).

Neasham’s model is about the size of a computer mouse and can be used via a USB plug with any computer manufactured in the last 10 years, which will greatly aid its use in poorer areas and developing countries.

Neasham, who is an underwater sonar expert, utilizes pulses of high frequency sound to build a picture of the unborn child onto the computer screen, much the way a traditional ultrasound would.  But Neasham adapted his model with knowledge of underwater tracking and communications systems he’s created for imaging seabeds (such as shipwreck missions and mapping geographical features).  This allowed Neasham to keep components and hardware costs to a minimum and work by manually sweeping a transducer over the skin while a focused image is formed by the PC software.

"There are tricks we employ in sonar signal processing to simplify the hardware," he said. "There are certainly techniques in this device that to the best of my knowledge have never been incorporated in a medical device before."

The device, which is seeking funding from a corporate partner, doesn’t provide images yet that are as clear as from a traditional sonogram, but that still stack up favorably for the cost.  Beyond maternal care, Neasham estimates the market could extend to diagnosing conditions such as gallstones and kidney stones and even veterinary care.