Last week we published patent litigation stats for 2016 as we learned that the numbers of District Court Cases had declined more than 20 percent compared to 2015. Several readers asked us if we can compare the total number of unique patents asserted in 2016 with prior years. This means if a patent is asserted multiple times in several cases, it is counted only once. Our Data Science Team looked at unique patent assertions and found out that 2016 was the lowest since 2010. As the chart shows, even pre-AIA numbers are much higher and in fact 2010 and 2011 had the largest number of unique patent assertions. 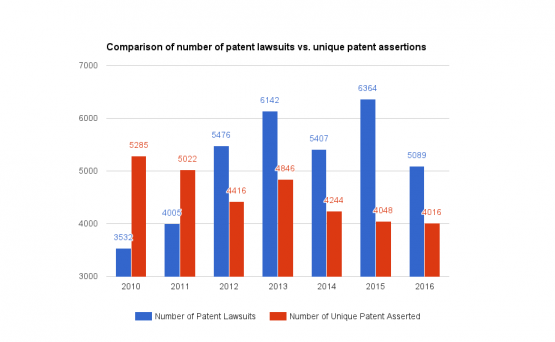 Our analysis shows that in 2016, the number of unique patent assertions dropped 24 percent compared to 2010. What does this mean? Fewer patent owners are stepping forward to assert their patent rights. While the number of cases had been growing post-AIA, we had explained in our previous posts that it was mainly due to the joinder rule and also a number of outliers among plaintiffs that asserted their patents against hundreds of companies (e.g.,US 6904359 owned by Shipping and Transit LLC, has been asserted more than 400 times).

The drop in activities by patent owners may be partially due to the current environment, the existence of powerful tools such as Inter-Partes Review (IPR), which helps defendants invalidate patents faster and cheaper, as well as overall reduced damages awarded by courts in recent years.

We also looked at the average number of times a patent was named in multiple district court cases, learning that 2016 represented the lowest number since 2012. In 2016, this number dropped to 2.3, which is 17 percent lower than the prior year.

As the first chart shows, the total number of unique patent assertions were similar in 2015 and 2016: 4,048 vs. 4,016. However, the second chart shows that patents, on average, were used in more cases in 2015. These facts lead us to conclude that either plaintiffs have been more cautious in 2016 and are testing their cases against a small group of entities before asserting them at large, or they have very unique targets and only assert their patents against those specific targets. Perhaps this is an indication that the quality of cases should be higher than before. 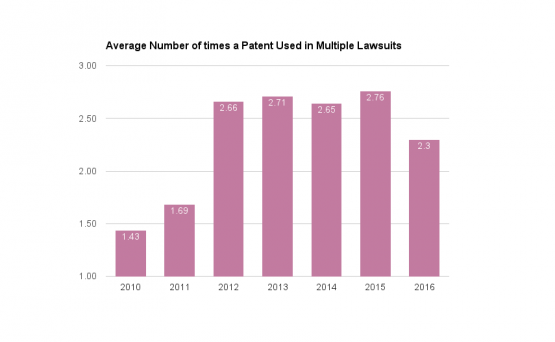 Another method to verify the above theory is to analyze the plaintiffs and see how the number of unique plaintiffs has changed over the years.

One other metric we examined, was the average number of patents per case. 2016 was slightly higher than 2015 (1.81 vs. 1.76), but more than 10 percent lower than prior years. This is another interesting metric, as several experts had predicted that in the post-AIA environment and with the risk of IPR, patent owners would include more patents in lawsuits to lower the risk of invalidation for all asserted patents. However, this lower number again indicates that patent owners are carefully examining their cases before moving forward. And if the patents do not meet their high standards, they will not move forward. 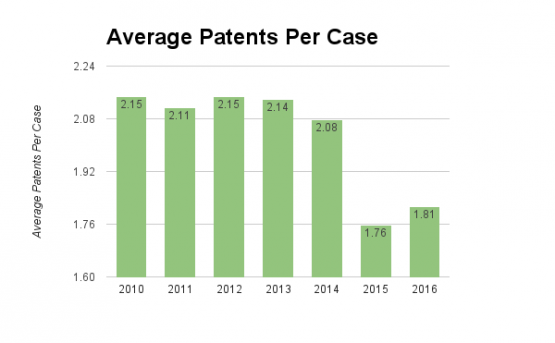 The last metric we examined was the maximum number of times a single patent asserted against multiple entities.US 6415207, one of the patents in the portfolio controlled by Shipping and Transit LLC, was named in 118 cases. However the second most active plaintiff was SportBain Holding Inc. and patentUS 7454002, which was asserted against 84 entities. 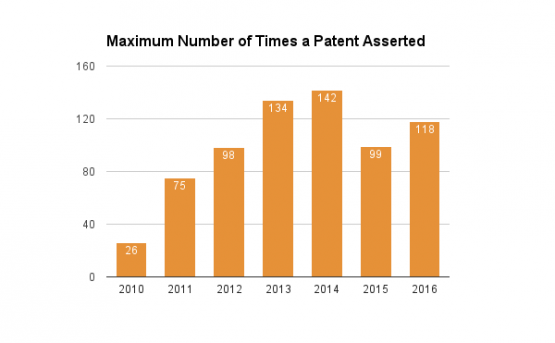 In 2016, while the total number of cases was down more than 20 percent, the number of unique patents asserted had not changed significantly. This explains why the IPR activity was almost unchanged in 2016 vs 2015 (Weekly Chart 23): basically defendants challenged about the same number of unique patents in both years. Our analysis of unique patent assertions indicates that plaintiffs are becoming more sophisticated, examining their cases more carefully and generally exhibiting more caution before they move forward and file a new case. This change in behavior of patent owners has resulted in fewer cases, fewer unique patent assertions and fewer patents per case.

In the coming weeks, we will examine the plaintiffs and look at the trend since 2010 (pre-AIA) to see if the number of unique plaintiffs has increased or decreased over the years.