Last week we reported on the top 10 all-time IPR petitioners and learned that Apple, with 267 IPR challenges filed from 2012 through 2016, was at the top. This represents approximately 5 percent of all of the 5,592 IPR challenges filed through 2016. This week, we decided to dig deeper and discover the status and outcome of all challenges filed by Apple. Out of the 267, about 47 percent of all challenges were denied, about 30 percent are still either pending or instituted, only 15 percent reached the final decision phase, while less than 10 percent of cases were settled. We further examined the cases to see if they were all filed for defensive purposes and in response to active lawsuits. We then analyzed the cases at the claim-level to see how many claims of those instituted were invalidated and how many survived the IPR. 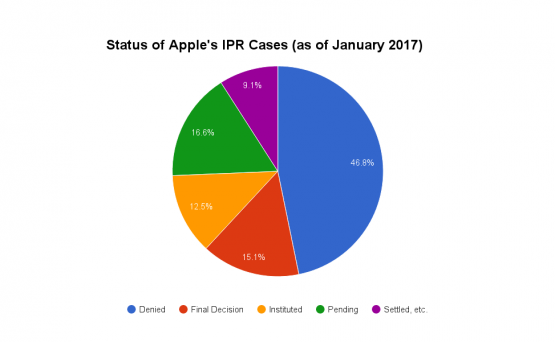 We started by reviewing all lawsuits filed against Apple from January 2013 through December 2016. This is the period that IPR became effective (other than the last quarter of 2012 where Apple only filed two IPRs). During this period, 186 patent lawsuits were filed against Apple in different District Courts. These lawsuits covered a total of 385 unique patents. During the same period, Apple filed 265 IPR challenges, which covered 160 unique patents. In some cases, multiple filings were done, because of the 60-page limit for the petition or use of different prior art for invalidation of different claims, etc.

We found that out of 385 unique patents asserted in 186 lawsuits, 125 were covered in Apple’s IPR challenges. That means Apple leveraged IPR to challenge approximately one-third (or exactly 32 percent) of the 385 patents asserted against its products. 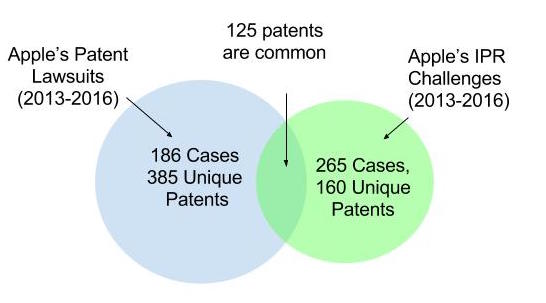 On the other hand, out of 160 patents challenged through IPR, 125 (or 78 percent) were named in lawsuits. That means in about one-fifth of cases, Apple leveraged IPR for a different purpose other than defense against active patent lawsuits. These may have been cases filed as part of a licensing / acquisition strategy or perhaps pre-litigation matters.

Removing duplicate claims, a total of 2,092 unique claims existed. The following table summarizes the status of these claims as of end of January 2017. Out of this number, 55 percent were denied institution, 22 percent were invalidated, about 9 percent were settled, 7 percent have been instituted but still pending, while only 6 percent survived the IPR process (validated). 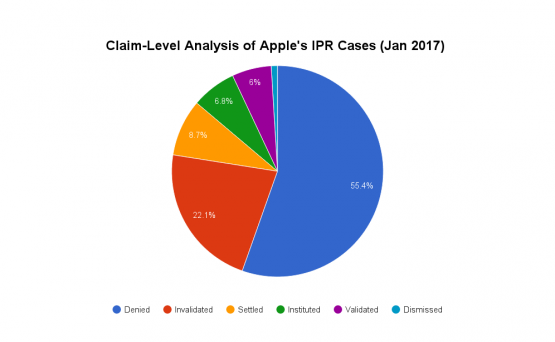 Now let’s focus on institution and final decisions. Out of 265 cases that we reviewed (2013 to 2016), 73 cases (or 27 percent) were instituted. Apple challenged 971 claims through these 73 IPR cases. However, to this point, 25 percent have been denied (not instituted), while 588 claims were instituted and have received the final written decision. Another 143 claims have been instituted, but have not received the final written decision.

Out of 588 claims that received the final written decision, not all were invalidated. In fact, 126 claims (or 21 percent) survived the IPR, meaning that the panel of administrative judges did not find them invalid.

Apple has filed about 5 percent of all IPR challenges from 2013 to 2016. Based on our analysis, about 80 percent of these challenges were filed in response to active lawsuits. They covered close to one-third of all patents (385) asserted against Apple during this period.  The other two-thirds of cases were either settled or the company used a different defense strategy (e.g., Joint Defense Group, non-infringement argument, defensive aggregators such RPX or AST, etc.). We further analyzed the claims challenged and learned that only 126 claims out of 588 unique claims that received the final written decision, survived the IPR challenges (21 percent). In total, 1,159 (or 55 percent) of 2,092 unique claims were denied.

In the following weeks, we will continue this analysis and examine the firms and attorneys Apple used for these IPR challenges as well as the outcome of their work.