Since the America Invents Act (AIA) became effective on September 16, 2012, the Inter-Partes Review (IPR) has drawn significant attention. Additionally, discussion has focused on how the Patent Trial and Appeal Board (PTAB) has become the “patent death squad,” utilized by defendants or potential licensees to challenge asserted patents. This week, we analyzed filings and outcomes of IPRs from inception in September 2012 to the end of 2015. The analysis shows more than 37% of the 3,953 cases filed during that period did not get instituted. Additionally, we observed the trend has been reversing over time. 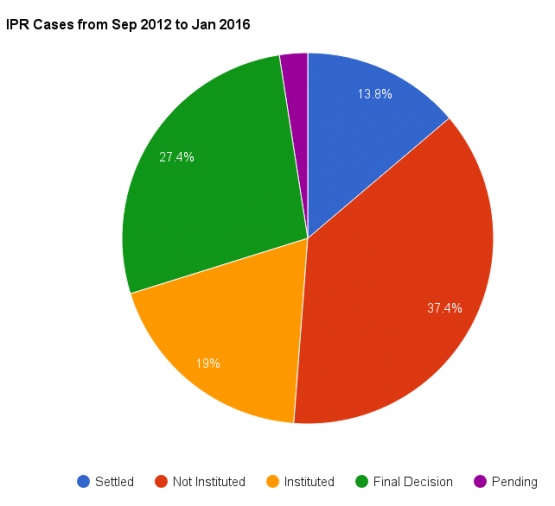 The number of IPR challenges filed per year has been rising steadily. A few weeks ago, we analyzed the lawsuit trends over the past several years, revealing 2015 had the highest number of cases per year. As IPR has become one of the most effective mechanisms that defendants use, the trend in the lawsuits closely affects the trend in the IPR activity as well.

For example, the first half of 2016 saw 751 IPR challenges filed, which is 13% lower than the 861 IPR challenges filed in the first half of 2015. Comparing that with patent lawsuits, 2016’s first half saw 2,480 cases filed, which is 27% lower than the 3,401 patent lawsuits filed in the corresponding period in 2015. As you can see, IPR filings are correlated and fluctuate by the number of lawsuits filed.

It is worth noting, plaintiffs often times file many cases to assert a single or a few patents against many defendants, while only a single IPR is needed to challenge that single patent in all those cases. For example, Shipping and Tracking LLC has filed more than 150 cases against many companies. Yet in many of them, only a single patent is involved (US7,400,970). As a result, the number of lawsuits and defendants rise in tandem, while the number of IPRs are directly correlated and increase if the number of unique patents involved in lawsuits go up. (Admittedly, sometimes defendants may file their own IPRs, as they may have a different prior art piece and a different argument.)

Studies commonly only focus on the number of lawsuits per year when drawing a conclusion. However, we believe the number of unique patents asserted per year is equally as important – if not more important – given that this number will dictate the strategy, the cost of using IPR as a defense mechanism, and also the likelihood of success for plaintiffs. Many experts have neglected this variable. In the following weeks, we will analyze the data to identify whether since IPR has become a reality, the average number of patents asserted per case has changed. We will also consider whether the total number of unique patents involved in lawsuits per year has been growing with the rise in the number of lawsuits. 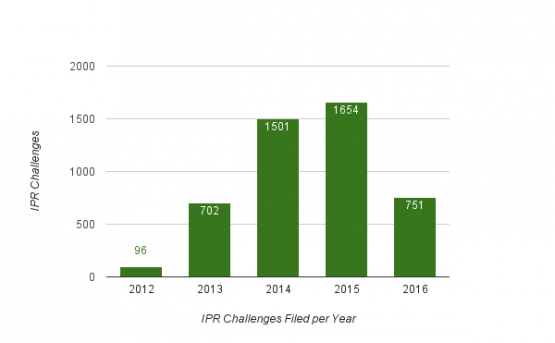 To examine whether PTAB (IPR) is actually a patent death squad, we decided to dissect the IPR filing numbers and look at the percentage of institution rate per year. We excluded the 2016 numbers, as most of them are still pending. 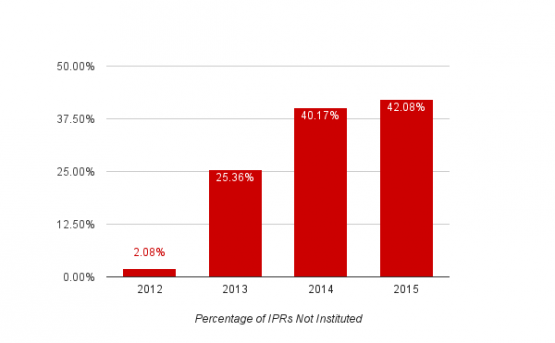 The result was very interesting. As mentioned earlier, 37% of the 3,953 IPR challenges filed from September 2012 till the end of 2015, have not been instituted. Our analysis shows that this rate has been increasing year-over-year. In 2012, which encompassed less than four months, 96 cases were filed and only 2% were not instituted. However, in the following years, this rate increased. Last year more than 42% of all cases filed were not instituted. This means that plaintiffs or patent owners have become more sophisticated in choosing their target patents.

We have also observed the same trend in our clients and their reasons for using our crowdsourcing platform to verify the validity of patents. In 2012 and 2013, most of our clients were defendants who were already in litigation. Now we see that use of our crowdsourcing platform for patent validity studies occurs earlier in the process. It’s now used more often during acquisition and licensing negotiations by both sides.

To further test the above assumption, we looked at IPR settlement rates. We assumed in most cases settlement of an IPR means that the patent owner believed or accepted that his or her patent had significant weaknesses and decided to settle for small amounts. Our analysis shows that except for the first year, in which only 96 cases were filed and people were not ready or very familiar with IPR, the settlement rate has been declining. This confirms patent owners are becoming more aware of this defense mechanism and are adjusting their strategy accordingly by checking the validity of their patents earlier in the process. “The early IPRs arose from disputes that predated the IPR procedure, so patent owners had to try to adjust their strategy on the fly, and many times unsuccessfully. Now that the IPR procedure and its risk to patents is understood, patent owners are taking it into account in their enforcement strategy” says Sanjay Prasad, principal of Prasad IP, PC in Los Altos, California who regularly advises patent owners as well as accused infringers in patent infringement disputes. 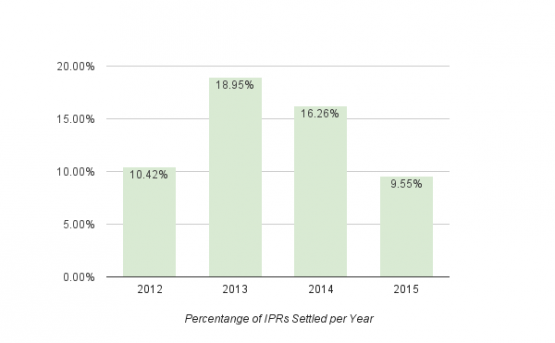 Finally, we analyzed the institution and final decision rates, assuming that in the majority of cases when an IPR is instituted, the judges on the panel that instituted the IPR are unlikely to change their minds. 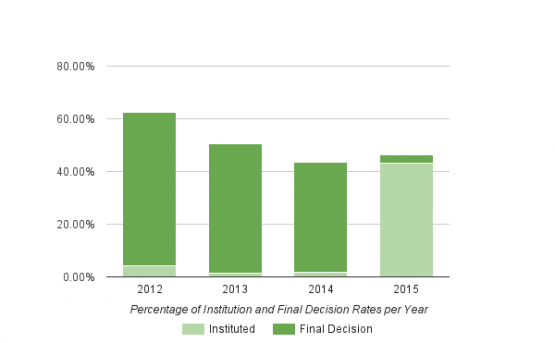 The majority of cases filed in 2015 are still being reviewed and are not final. Yet, we can see that the rate of cases that have a final decision confirm that the institution has been declining from 58% in 2012 to 42% in 2014.

Our analysis indicates that the IPR success rate has been declining since it became effective in September 2012. While the entire model is only a few years old and the PTAB has been constantly improving its processes, we believe that patent owners, at the same time, have become more aware of and are adjusting to the new reality by checking the validity of their assets before thinking about licensing or monetization.

In your opinion, what other factors are impacting the litigation and licensing landscape?

Tags
inter partes review patents patent infringement ptab
Share
Previous Post
Next Post
Van EconomouIt is the low hanging fruit phenomenon. The patents which had obvious (pun intended) problems were the first to be IPR'd and with time these were harder to find.
Aug 3, 2016
Pedram SameniMost likely that's what happened. We believe the quality of patents in new cases should generally be higher.
Aug 3, 2016
2nd Annual Patexia Mixer