Tomorrow, we are releasing our Third Annual Patent Prosecution Intelligence Report, where we have analyzed the patent prosecution data for five consecutive years (2016-2020), covering various statistics related to the USPTO, Technology Centers, Art Units, Examiners, Law Firms and Corporations. The report also includes the growth and decline of most active law firms and companies.

Companies with the Largest Growth

In 2020, a total of 498,389 patent applications and 391,353 patents were published. Similar to our evaluation of law firms, we only considered the top 1,000 most active companies in 2020 and compared the volume of patents for them with what they had obtained in 2019. To make a fair assessment, we measured the absolute change in the volume instead of percentage of growth or decline. The following bar chart illustrates the top five companies with the largest growth in 2020. 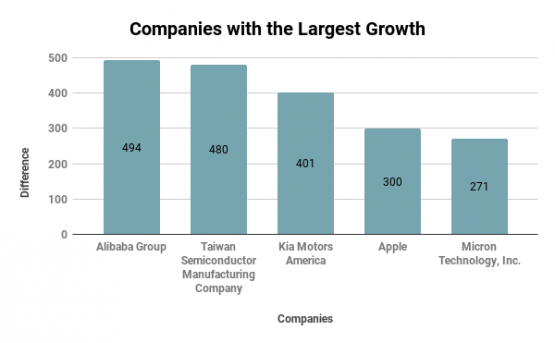 Taiwan Semiconductor Manufacturing Company (TSMC), on the other hand, as the largest semiconductor manufacturer in the world, has been in the spotlight all throughout 2020. This was mainly due to the global chip shortage. But the company remains at the center of geopolitical conflicts between Taiwan, China and the US in that region as the situation has exacerbated in recent months and the technology/economic war between the two superpowers has intensified. In the meantime, the company seems to have expanded its R&D as judged by their patent activity. TSMC obtained 2,345 patents in 2019 versus 2,825 patents in 2020, which represents a 20 percent increase. TSMC utilizes the law firm Haynes & Boone, LLP as well as Slater Matsil and Eschweiler & Potashnik.

The patent work for the third company on our list, Kia Motors America grew 43 percent as the number of issued patents increased 401 from 2019 to 2020. This company uses a variety of law firms such as Morgan Lewis & Bockius, Mintz Levin Cohn Ferris Glovsky & Popeo, and Brinks Gilson & Lione.

Apple, the leader on many fronts, also managed to be listed as one of the top five companies with the largest growth in the number of issued patents. The company’s growth from 2,502 patents in 2019 to 2,802  in 2020 is noteworthy. Apple's top patent firms are Kowert, Hood, Munyon, Rankin & Goetzel, Sterne, Kessler, Goldstein & Fox, and Treyz Law Group.

Companies with the Largest Decline

Companies with the largest decline in the number of issued patents from 2019 to 2020 are shown below. 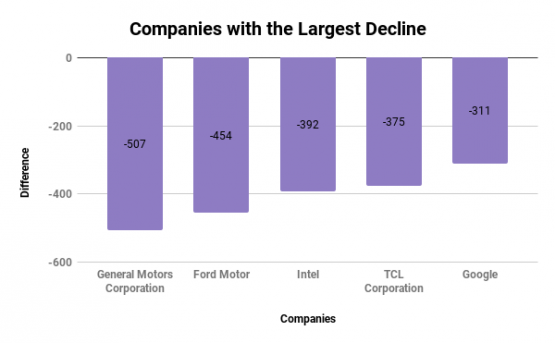 General Motor Corporation shows a 38 percent decrease from 2019 to 2020. In addition to the patent drop, according to NY Times due to COVID, the company also saw a significant decline in vehicle sales (12 percent in 2020). The company's main law firms are Quinn IP Law Group, LKGlobal, and Reising Ethington.

Ford Motor is the second company with a decline of 454 in the number of issued patents in 2020, a drop of 17 percent. The company’s most utilized law firms in the last five years are Brooks Kushman, McCoy Russell and Price Heneveld LLP.

The table below summarizes the companies with the largest growth and decline with additional details including the number of patents they obtained in 2019 and 2020 followed by the change in these two years.

Companies with the Largest Growth and Decline

As we release our popular Patent Prosecution Intelligence Report (2021 Edition), we plan to continue our coverage related to this area. In the following weeks, we will reveal some of the recently formed patent firms and also cover the firms that decided to shut down their practice due to various reasons. We also plan to cover the top firms and companies for trademark as we will release our first Trademark Prosecution Intelligence Report soon. Stay tuned!