Last month, we released our fourth annual Patent Prosecution Intelligence Report, one of our main reports in the Patexia Insight series. As promised in our previous report, for the first time this year, we have identified and ranked attorneys and agents which is now possible thanks to a couple of years of research and hard work by our data scientists that automated the data extraction from millions of documents available through the USPTO.

This report, aside from the rankings of all entities and stakeholders, maps the patent prosecution landscape as well as offers detailed insights into levels of activity and patenting trends. Having already covered the most inventive US states and cities in our Patexia 134, this week we are going to focus on the activity of foreign entitiesin, especially China that during 2021 became the second most active foreign country to obtain patents in the U.S. and moving South Korea to the third place.

We have been providing insights on activities of foreign countries in our Patent Prosecution Reports since it makes up for almost half of the patent prosecution activity in the U.S. Our data as shown in the following chart, indicates that the share of total patents issued to foreign entities remains relatively stable, averaging 47.6 percent during the past five years. In absolute terms, this represents 91 issued patents per every 100 patents issued to U.S. entities. 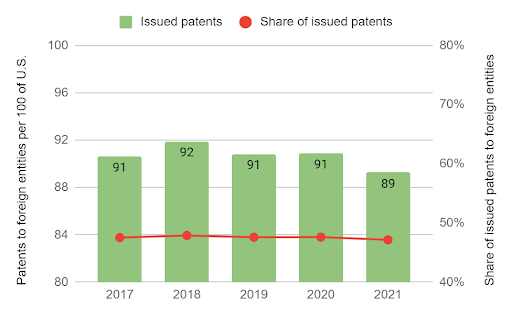 Finding out that foreign companies have this kind of weight in patent filing, definitely makes it more interesting to find out how this trend breaks down for individual countries. We have extracted the data on the country of the assignee or the country reported by applicants in patent filings before the USPTO, and based on that information we have been able to monitor important changes in the patent filing landscape when it comes to foreign activity. To learn where the most active foreign entities come from to obtain patents in the U.S., we ranked the countries as reported by the foreign assignees. 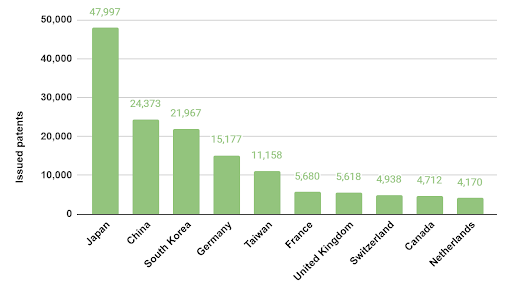 As shown in the above chart, the top three foreign assignees for 2021 are Japan, China and South Korea. Germany and Taiwan occupy the fourth and fifth positions, respectively while the rest of the top 10 countries have obtained less than 10,000 patents each. When compared with the data from the 2020, it is noticeable that China has climbed up from the third position to the second, swapping places with South Korea that nonetheless remains an important player with over 20,000 patents obtained in 2021.

We had predicted this climb for China when reporting the fastest growing and declining countries in the previous Patent Prosecution Report (2021). China ranked the fastest growing country and for 2021 it ranked second with a growth rate of 18.84% when compared to 2020. This percentage is quite significant because for a country with over 20,000 patents, it means that the growth will be at the levels of 3500 up to 4000 patents in absolute terms. The following chart illustrates the trends for the Chinese entities in the past five years: 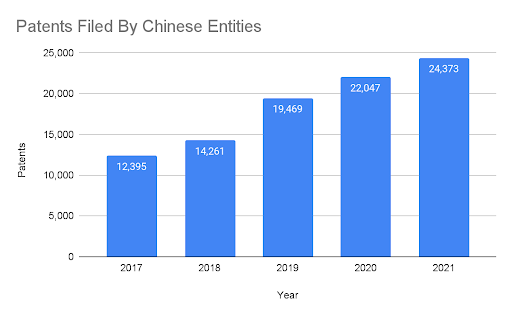 The reasons behind the growth for Chinese entities in the U.S. might be in the realm of speculation and this deserves another dedicated insight. There are arguments which claim that the high number of patents filed in China and elsewhere from Chinese entities is due to companies and individuals seeking government subsidies, job promotions or simply higher reputation, confirming them as high tech entities. This means that these patents might be more volume-driven rather than innovation-driven. However, what is noticeable is that the increase derives from the fact that China has become a major global player in the patent filings during the past decade. Since 2011, China leads globally with the most patent filings with over 1.2 million patents filed each year since 2016.

Furthermore, as reported by WIPO which oversees a system for countries to share recognition of patents, 2021 was the third consecutive year where Chinese entities filed the most PCT applications. The chart provided below with these numbers from WIPO shares resemblance with the one provided by our data for issued patents at the USPTO. 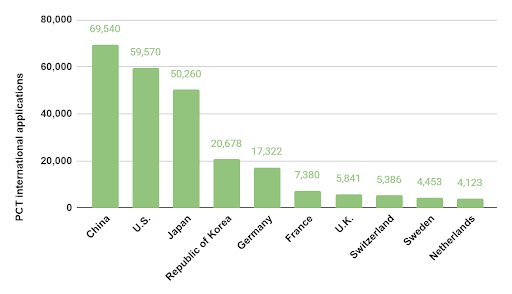 Stay tuned for more insights from our Patent Prosecution Report in the coming weeks, including the rankings of the best performing and most active entities, as well as the coverage of the best ITC attorneys.