Three years ago, we started publishing the Patexia Insight Series with our first article about the Shortage of Patent Attorneys in the U.S. A lot has changed since then. In June of 2016, we reported a total of 44,424 registered patent professionals. Over the last three years, the number has grown to 47,079 for roughly a 6 percent increase. During this period, 3,005 new patent professionals passed the patent bar exam and about 350 left the workforce. This resulted in a net increase of 2,655 patent professionals (attorneys and agents). This chart shows which states have grown the most over this 3-year period. 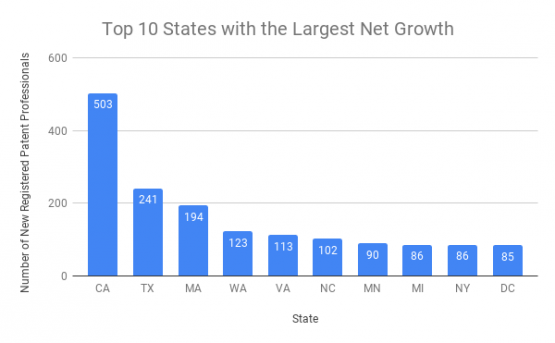 California still shows the largest net growth. And if we combine Virginia and DC because of their proximity to the patent office, they will come third after Texas, with a net growth of 198. The ones that are more interesting are North Carolina, Minnesota and Michigan. To put this into perspective, we have illustrated the percentage of growth since June of 2016 for the above 10 states in the following chart. 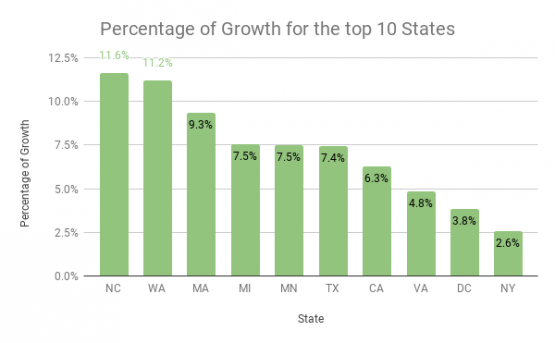 We think the prosecution practice is driving most of the growth in North Carolina, Michigan, Minnesota and even Texas. Meanwhile, in states such as California and New York, patent litigation and life science patent prosecution are the main drivers of the growth.

When we reported the numbers in July of 2016, patent litigation had just peaked in 2015 and patent prosecution was showing steady year-over-year growth. Since then, the district court litigation has dropped a whopping 40 percent (Patexia Insight 52). In 2015, a total of 5,874 patent lawsuits were filed in U.S. district courts, compared to 3,491 patent lawsuits in 2018.

Considering there is a lag between filing and issuance, the slowdown in the U.S. filings should have also started a few years ago (at about the same time as litigation). All of this has been happening at the same time that the patent sector has been going through some significant changes (Patexia Insight 54):

●      The retirement age, which used to commonly be 65, now has been pushed out. Many law firms show more flexibility and will maintain their partners, especially if they are generating revenue. For example, our recruiting group (Patexia Connect) is working with several IP attorneys in their 70s and even 80s who are still active. One even works 6.5 days a week in his 80s.
●      There is constant pressure on cost among corporate clients, especially in high-tech patent prosecution, which is driving the profit margins down.
●      Legal outsourcing companies have penetrated the industry. While their market share is still small, they are growing. This includes Indian-based companies that not only help with patent searches these days, but even work with patent drafting.

Who is expanding and absorbing the new workforce?
Since June of 2016, a total of 2,655 new patent attorneys and agents have entered the market. While it is difficult to measure the exact percentage, a good portion of all the registered patent professionals are not practicing patent law. They sometimes pass the patent bar exam for possible future use. However, they may practice something else or even work outside of the legal field completely (e.g., an engineer in a tech company who has only passed the patent bar). Let’s take a closer look at the expensive California market, which absorbed about 20% of the newly registered IP professionals (attorneys and agents). 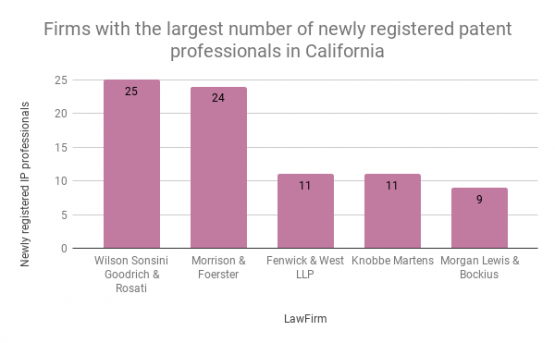 As you can see, 80 patent attorneys and agents, which accounts for about 16 percent of the total 503 new patent professionals in California, joined one of the above five firms. Wilson Sonsini, with 25 new patent attorneys and agents ranked first. A closer look at the firm’s clients and expansion, suggests that the majority of the new IP professionals have joined their life science patent prosecution group. The firm has a very robust life science prosecution group and has an active hiring program for recently graduated attorneys or scientific advisors (they may later pass the patent bar exam and become patent agents). Further review of their work shows that over the last five years, more than 30 percent of all their issued patents (869 out of 2,809) were under IPC code A61K, which is related to new drugs. The top five IPC codes are A61K, A61B, C07D, A61F and G01N, which are all related to life sciences. While the firm has a very diverse portfolio of clients, their top two clients are Align Technology and AbbVie Inc. Both companies are in life science. 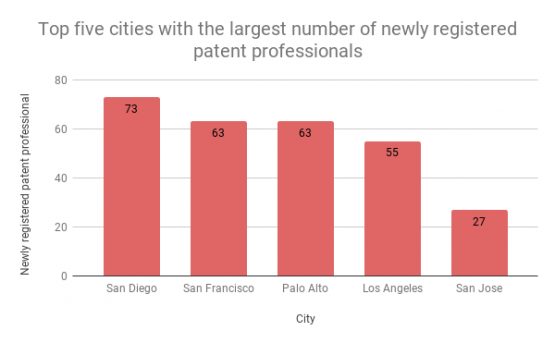 The top five cities absorbed about 56 percent of the new workforce. San Diego ranked first with 73 patent professionals or almost 14 percent. Many large medical device and pharma companies are located in San Diego

Concluding remarks
While both patent litigation and prosecution have been declining, litigation clearly remains more profitable. That makes it more attractive to larger firms. And while the profit margin for patent prosecution is overall under pressure, patent prosecution in life sciences is by far more profitable than high-tech and as a result more attractive to expensive coast cities. We have noticed that more firms are re-positioning their prosecution practice to expand their market share in life sciences. This includes targeting the growing Asian market in pharma and bio-similar.

Additionally, the decline in litigation has been more noticeable on the NPE side (non-practicing entities). They used to file many cases against operating companies (often based on the same group of patents). However, because of many unfavorable outcomes, they are not as active as they used to be.

In addition, many NPE cases may end with a quick settlement, as opposed to cases between blue chip companies, such as Qualcomm and Apple, that may go on for several years.

In the past, NPE cases were mostly handled by small firms, and often based on contingency. These days, some NPEs have become more active overseas in Europe (e.g., Germany) and Asia because of existing challenges in the U.S. including the new hurdle added by PTAB after introduction of IPR in 2012, which has changed the model and forced firms to operate more based on a hybrid model than pure contingency. These days, many of the U.S. based filings are funded by litigation funds. These funds, in general, prefer more established and larger firms over small boutique firms.

Based on this, we believe, in litigation, the growth is being absorbed by the top Am Law 100 brands including the ones with large presence in San Francisco, Silicon Valley, New York and DC markets. Meanwhile, in prosecution, top mid-market brands have been growing in states such as Texas, North Carolina, Minnesota and Michigan while California and New York remains attractive for life science patent prosecution.

Within the seemingly saturated and expensive California market, the state has absorbed almost 20 percent of all the new patent professionals (503 new attorneys or agents). Several Am Law 100 firms are expanding more into California. Mergers between law firms is expected to surge in California.

WilmerHale, with offices in Los Angeles and Palo Alto, reportedly is looking to open a new office in San Francisco. With Intel, Apple, Facebook, Symatec and many more Silicon Valley companies among their clients, they feel they need to be closer to the action. A couple of other larger Am Law 100 firms have also expressed interest in considering new offices in San Francisco.

Firms such as Quinn Emanuel or Kirkland & Ellis are as busy as they used to be. Thanks in part to litigation between big corporations such as Qualcomm vs. Apple, or Huawei vs. Samsung, which usually goes on for many years. Kirkland’s revenue saw an increase of about $600M in revenue and passed $3.7B in 2018. (The profit per partner passed $5M for the first time.)

As a side effect, this has resulted in associates at larger firms such as Quinn Emanuel and Latham & Watkins to often overwork. Some, reportedly bill even more than 3,500 hours per year which means average of 10 billing hours per day. At the same time, in many small to mid-size firms, there is not enough work to keep associates or partners busy all the time. The pressure is on small and some mid-size firms. They may see merger as an option to continue their growth.

In the coming weeks, we will publish a case study about Apple, looking into the company’s prosecution cost and comparing different firms working for Apple. Stay tuned!