Search
Pedram SameniJun 8, 2022Legal
Patexia Insight 140: Which Companies had the Largest Growth or Decline in Patents in 2021?

In April, we released our fourth annual Patent Prosecution Intelligence Report, where we covered the patent prosecution landscape, looking at a five-year period based on the issue dates between January 1st, 2017, and December 31st, 2021. Besides providing analysis of activity and trends, the report also evaluated and ranked all the stakeholders including the patent attorneys and agents for the first time.

This was possible only after several years of hard work by our data science team to automate the data extraction process and review millions of the USPTO documents from file wrapper, using Machine Learning (ML) and Natural Language Processing (NLP) techniques. We already covered some patent statistics such as the Most Inventive Cities and States in the U.S. in Patexia 134. This week, we will focus on companies with the largest growth or decline in the number of issued patents in 2021, as compared to 2020.

As we analyzed in Patexia 136, approximately 47.6 percent of the patents filed by foreign entities. China has now become the second most active foreign country after Japan. In 2021, a total of 364,713 patents were issued including design patents. On average, this number has grown at a rate of 1.16 percent per year in the last five years, while in 2021, it dropped 6.81 percent,compared to 2020.

To understand which entities are the ones with the largest growth or decline, we limited our analysis to the top 1,000 most active companies in 2020 and performed a comparative analysis with the data of 2021. To further identify the entities that had the largest change, we compared the absolute numbers instead of percentage of change. There are companies with a small number of patents, where a growth or decline of a handful makes it quite significant in terms of percentage. The following bar chart illustrates the top five companies with the largest decline in 2021: 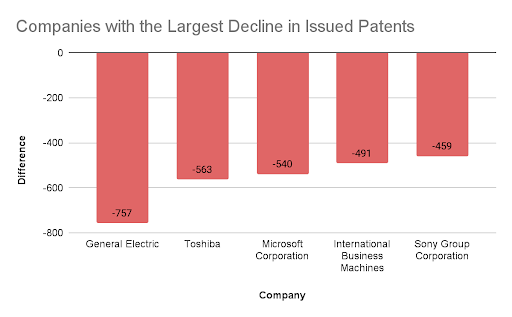 It’s noticeable right away that all of the above five companies come from the tech sector. While Sony and Toshiba are headquartered in Japan, the rest are American companies.

General Electric's decline is one of the largest in percentage as a decline of 757 patents in 2021 is equivalent to 32.34% decline. While its most profitable unit, aviation, suffered a hard hit during 2020 from the pandemic, in 2021 the company’s shares rose 9.3%. In November 2021, it was announced that the company would split into three companies and it will be interesting to follow how the company will also allocate billions of dollars’ worth of R&D and how it will divide its intellectual property as part of this split.

Toshiba's decline was also significant as the decline of 563 patents in 2021 accounts for almost 23.91%. They, however, reported that 2021 was a good year for sales, which went up 9.3%.uring the last decade. The Japanese companies' domestic patent filing trend has been declining. Even from the USPTO, a total of 48,000 patents were issued to Japanese entities in 2021, which is 13 percent less than 55,237 issued in 2020.

Microsoft Corporation patents have been declining since 2019, even though their R&D spending has been on the rise at least for the last thirteen years and now rank second among software and computer companies in terms of research and development expenses. During 2021, they reported an 18 percent growth in revenue accompanied by a record spending on research and development which amounts to $20.7 billion.

Most of International Business Machines’  innovative projects are related to hybrid cloud solutions, AI, blockchain as well as quantum computing.

This downward trend seen in the number of patents issued for Japanese entities may need a deeper study. We plan to research the topic and review our data in another Insight in the near future.

The following chart shows the top five companies with the largest growth in the number of patents in 2021. 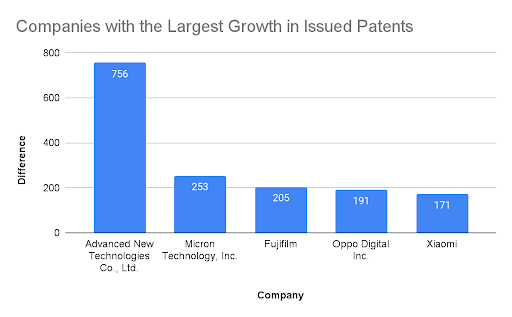 Advanced New Technologies Co., Ltd. has grown significantly in 2021. Obtaining only a handful of patents every year before 2019, they got 16 patents in 2019, 144 patents in 2020, and a total of 900 patents in 2021, a growth of 525 percent. Fish & Richardson, Sheppard Mullin Richter & Hampton and Finnegan, Henderson, Farabow, Garrett & Dunner were the top law firms that worked closely with them to secure these patents. They design and build bespoke mobile Apps and web applications for multi-national companies like Coca-cola and EMR. The apps developed by them in recent years as well as their main software SMARTAA Foundation, have led to many innovations related to software technology, which they have patented especially in 2021.

Micron Technology, Inc. has been growing steadily during the last five years, holding 1,804 patents in 2021. They produce computer memory and data storage such as RAM, flash as well as USB drives. The focus on innovation and their growth in research and development justify this growth in patents. The company recently warned that the lockdown in the Chinese city Xi’an would affect their supply of DRAM memory chips, however they worked to minimize the risk of virus transmission and the lockdown was lifted in January 2022. Another recent issue for them was the component and raw material shortage caused by the Ukraine war, however they reported that the supply of raw materials has been addressed and diversified, although an increase in costs is expected.

Fujifilm reports a 11.04% increase in revenue after a few years of decline. Their expenses of over $1.4 billion yearly for research and development have helped the growth in patents overall.

Oppo Digital Inc. is a Chinese company owned by BBK Electronics. Focusing on electronics such as television sets, MP3 players, digital cameras and smartphones. The company’s patent portfolio has grown since 2019. Their investments in research and development seem to be paying off in innovation and patents.

Xiaomi spends almost $2 billion in research and development and this seems to boost their patent numbers as well as the revenue, reporting a 33.5% growth in revenue during 2021. With Huawei being sanctioned by the US since 2019, Xiaomi seems to be filling the void and becoming a leader in smartphone manufacturing.

The table below summarizes the companies with the largest growth and decline with additional details including the number of patents they obtained in 2020 and 2021 followed by the change in absolute value and percentage during these two years.

The full Patent Prosecution Intelligence Report further includes the analysis of top 1000 most active companies and their rankings based on their activity and performance in three different categories, bio-tech, high-tech and overall. Stay tuned as in the following weeks we will continue this coverage by publishing some of the most active and best performing law firms and attorneys.