In early September, we published our IPR Intelligence Report, the sixth in an annual series covering the IPR proceedings landscape that took place during the last five years. This report provides high-level statistics related to all parties involved, cases, patents, and claims. The report also evaluates and ranks IPR firms, attorneys, companies, and judges under different categories (Petitioner, Patent Owner, and Overall) based on their Adminstrative Patent Judges (APJs) based on their activity and performance. We have already covered the best-performing and most active law firms involved in the 7,030 IPR challenges filed during the period of our study (Patexia 158) and the most important IPR lateral moves that took place during 2022 (Patexia 159). This week we will cover some of the very best IPR attorneys based on their performance and activity from our 2022 report.

Our study covered a five-year period from July 1, 2017, through June 30, 2022, where a total of 7,030 petitions were filed to challenge 77,846 unique claims from 4,966 unique patents. In order to generate an extensive analysis and provide performance rankings in addition to the activity, we reviewed the outcomes of all cases. While the cutoff day for cases was June 30, 2022, we used the latest updates for the cases as of August 25, 2022. As shown in the following chart, 78.4% (or 5,515 cases) have one of the following four statuses: Terminated-Denied, Terminated-Settled, Terminated-Adverse Judgement, and Final Written Decision (FWD) Entered. These are the most common outcomes for an IPR and nearly all cases eventually will end up in one of these four categories. Instituted cases comprised 8.8% of the total, but they eventually will settle or receive the final written decision. About 7.0% of the cases are pending, which means they were filed within the last six months (Notice of Filing Date Accorded or PO Response Filed). These too at some point, will change to one of the above common statuses. Only a fraction of the cases is terminated because of some procedural errors. 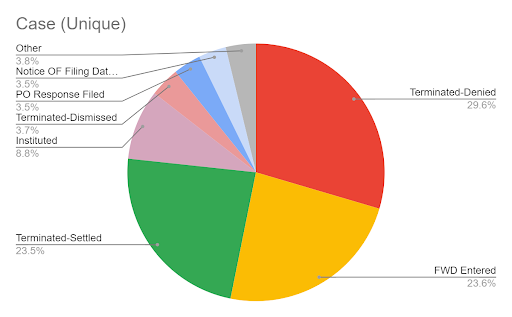 Our source for assigning a case is PTAB documents. We rely only on the documents issued by PTAB (e.g., Institution Decision, Final Written Decision, Mandatory Notices, and Power of Attorney documents) to see who has been involved in a case. Other than using computer algorithms for cleaning and normalizing the names based on many variables, we have also reached out to every attorney named in this report to review their public profiles on Patexia and update us if any cases were missing from their profiles. Overall, 5,626 attorneys represented either the patent owners or petitioners in one of the 7,030 IPR cases filed over the last five years. This includes 3,403 attorneys representing petitioners and 3,886 attorneys representing patent owners, while some attorneys were quite active on both sides.

In the following table, you will find a list of some of the very best IPR attorneys, earning their mention either for their high activity or for their top performance in no particular order (being named on this list means the attorney was in the top 6% out of 5,626 attorneys):

The full IPR Intelligence Report goes further by covering several key statistics related to filings, outcomes, most popular IPC codes overall as well as top IPC codes for patents involved in IPRs with Denial, Settlement, and Final Written Decision conclusions. Using the activity information as well as the effective outcomes of each decision we generated the complete rankings for all of the 5,626 attorneys and the other stakeholders including law firms, companies, and judges, which are also provided in the report. 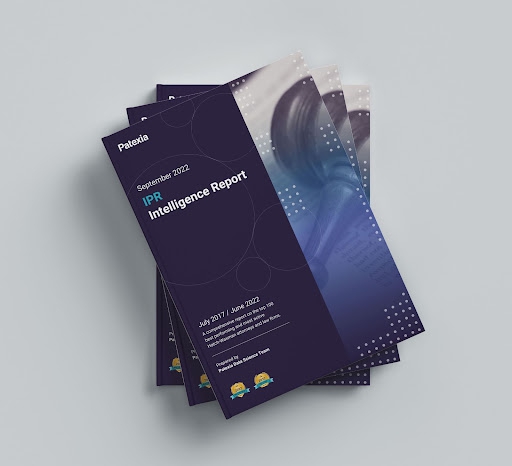 We have updated and improved our ranking methodology every year since the release of our first IPR Intelligence Report in 2017 via feedback from our community through direct communication or by conducting surveys. Combined with the experience we have gained over time, the feedback has helped us improve and make the rankings more relevant and useful.

The Activity Score and rankings are based on the number of cases where an attorney was involved, but with several improvements. Most of the IP community as well as companies’ in-house counsel values the recent activity more, so we applied a weight system for cases filed in different years. This way, an attorney with 50 cases filed in 2017 ranks slightly lower than an attorney with the same number of cases but distributed throughout the years. To make the comparison between entities with different activity levels easier, we calculated the activity score as a logarithmic function. This ultimately avoids large gaps between entities with more cases than the average.

For the Success Score, we considered only the terminated cases. We pay special attention to the Final Written Decisions where the petitioners didn't manage to invalidate all of the claims initially challenged. One of the major updates this year is the new scoring assigned to these cases. We understand that if the surviving claims were part of a district court case, that is good news for the patent owner, because they can still move forward and potentially claim damages for infringed claims in the district court. Therefore, from that perspective, it would be considered a victory for the patent owner. However, when it comes to IPR, the attorneys representing the petitioner have also damaged the patent by invalidating possibly some of the asserted claims. This could be leveraged by them in negotiating more favorable terms in a potential settlement agreement. Therefore, they deserve recognition for their work and get at least 0.5 points for one invalidated claim. If they manage to invalidate more than one claim, then they get more credit for the outcome based on the table below:

In the case of settlement, while it may be seen as a good outcome for both parties, it often means the patent owner and its representative felt the case was not strong in light of the existing prior art and the argument brought forward by the petitioner. They then decided to settle to cut their losses rather than move forward with the IPR. For this reason, the patent owners get 0.25 points while the petitioner 0.75.

As for the Performance Score, we combined the Activity and Success Scores. This was done as large case numbers will inevitably dilute the performance over time. It makes it unideal to compare the performance scores of firms/attorneys with very different caseloads, even after excluding firms with low activity. For this reason, the Performance Score is calculated as a weighted average of success and activity scores. This ultimately helps companies find highly active and highly successful law firms and attorneys for their cases (i.e., the most qualified ones).

Stay tuned as in the following weeks, we will cover key statistics from our CAFC report released in October, as well as some of the best CAFC attorneys and law firms in 2022 with data from our latest CAFC Intelligence 2022.