Last couple of weeks, we looked at the impact of COVID-19 and recession on IP, specifically patent prosecution. We concluded that there would be at least two to four percent decline in the number of applications for the next couple of years (Patexia Insight 79). We also discussed the recession impact on IP hiring at general practice or IP boutique firms (Patexia Insight 80).

The outlook is generally disappointing, but some firms will manage to grow even during this downturn. One of the growth scenarios will happen when the firm’s workload comes from a company in a growth phase.

We decided to look at the top 1,000 most active companies we covered in our latest Patent Prosecution Intelligence Report published in March in order to identify the companies that have shown the largest growth or decline in the number of issued patents in 2019 as compared to 2018.

Reviewing the filing trends for companies is very important and valuable for patent firms and it should become part of their budget planning and revenue forecasting each year. The analysis will provide the firm with business intelligence and prepare them for what they should expect in the following months or years.

For example, if a company’s patent filings have been declining over the last five years, the downturn will most likely accelerate that downward trend and those firms that are representing the company before the USPTO will be affected because of further revenue loss, especially as we enter this downturn.

Similar to the other study we conducted recently for law firms (Patent Firms with the Largest Growth and Decline), we limited the study to only utility patents and only considered the absolute growth or decline in the numbers for each of the top 1,000 companies. This provided us with a more meaningful outcome and comparison as we identify the absolute change in the workload rather than the percentage of change which may only reflect a small drop in the amount of work for companies with smaller volume.

Companies with the Largest Growth in 2019

The following bar chart shows the top 10 companies with the largest growth in the number of US patents in 2019, compared to 2018. 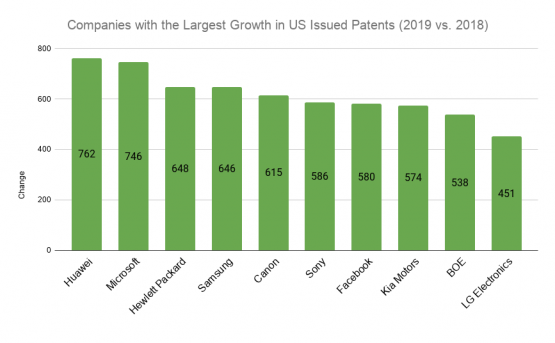 Companies with the Largest Decline in 2019

Some companies went out of business or merged with larger companies in 2019, which resulted in zero filings under their names. However, for the purpose of this study, we only considered the top 1,000 companies that had remained active in 2018 and 2019 but had shown significant decline in the number of issued patents in 2019. The following bar chart shows the top 10 companies with the largest decline in the number of US patents in 2019. 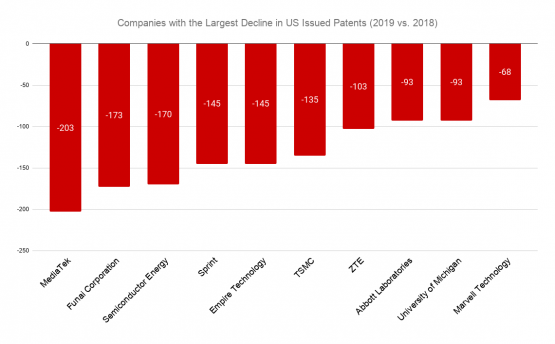 This study was only meant to show the value of business intelligence and analytics for budget planning and revenue forecasting. Most of these large corporations have several business units and depending on the technology sector, different law firms may work only for a few of their business units.

Patent firms may look at the growth or decline of work under different art units or technology centers based on their type workload and applications they receive. This will help them to better understand the trends and plan accordingly.

As patent firms face the new challenges imposed by COVID-19 and the downturn, it is important to understand what they should be expecting in the months ahead and if that signals any possible reduction or increase in their workload.

At the same time, corporations can use similar data and analyze the trends for their sectors to see if their investment in R&D and IP budget is inline with the average for their sector.

In the coming weeks, we plan to identify some of the most expensive patent portfolios based on the cost of prosecution and the model we developed for that (Patexia Insight 77). We would like to find out if there is any correlation between the cost of portfolio development and the quality of those portfolios. As suggested by one of our readers, such studies and the proper IP metrics can help the corporate audit committees at Fortune 1000 companies to shed some light on the IP cost/value issues and whether the spending is justified. Stay tuned!

As Alan Lakein says: “Failing to plan is planning to fail.”